How To: Infusing Tonka Beans in Oil 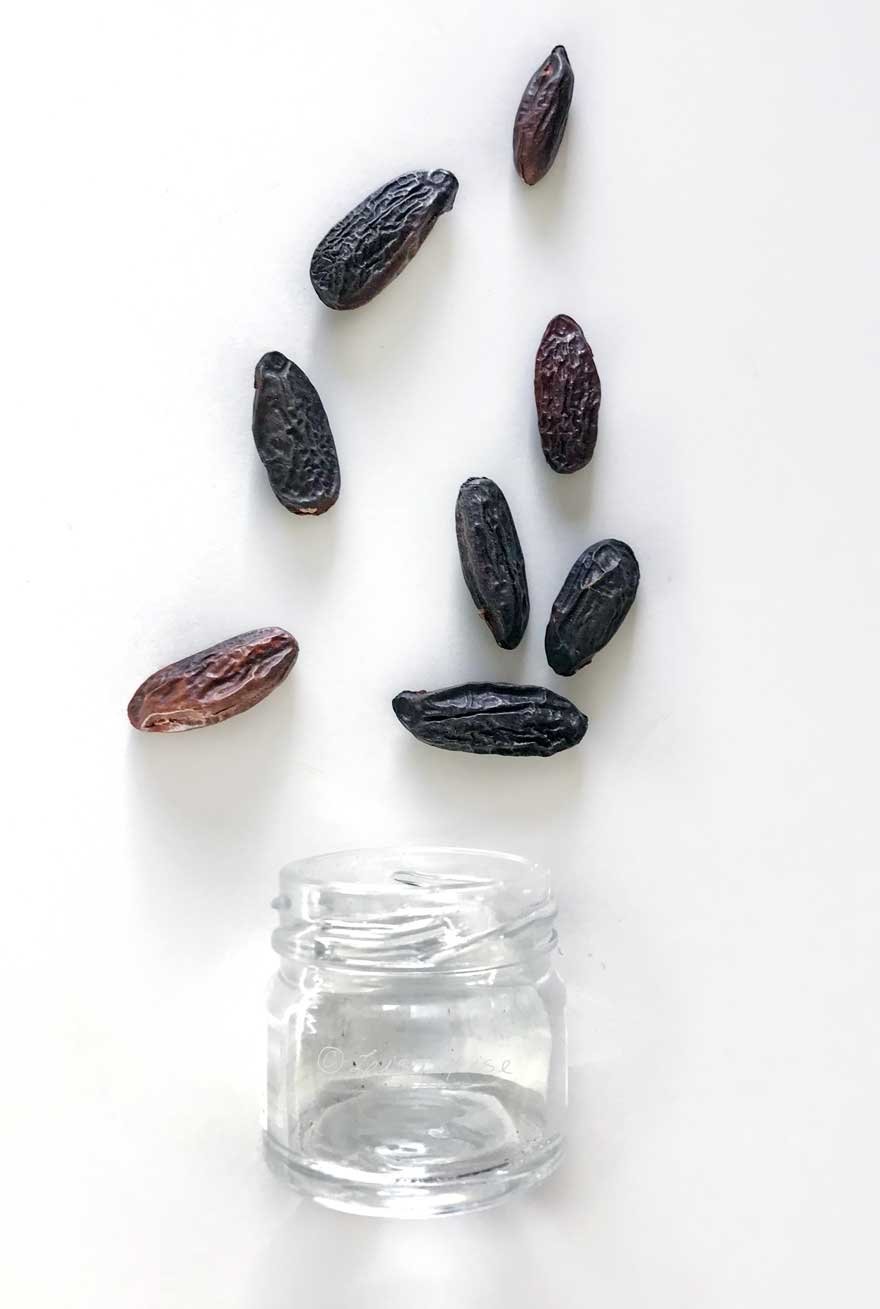 One might be tempted to think these were raisins or dates, but these are tonka beans (dipteryx odorata).

I happened across some last year, ordered a sample sized portion, and made an infusion I meant to share with you, but time somehow got away from me.


A Bit About Tonka Beans

These aromatic beans are also called tonkin beans and tonquin beans. They have a high content of coumarin, which gives them a sweet odor but bitter taste. Many describe the scent as having notes of vanilla, almond, and cherry.

Even though these beans have many culinary uses, their content of coumarin is the reason they are technically banned in the USA. High doses of coumarin is said to cause liver problems. (ref)

The beans have traditionally been used as a vanilla substitute as well as in perfumes and even in some tobacco products (think of the rich, warm, scent of some pipe tobaccos and you’re on track).

I find the scent fits the description pretty well: vanilla, almond and cherry do play into to the overall fragrance, but if you asked me to describe it, I would say tonka bean smells like 'a masculine version of vanilla'. It's heftier, deeper and, well, more manly somehow.

As I had a very small amount of the beans (the entire order is pictured at the top), I decided to use the lot. To release as much of the fragrance as possible, I prepared to crush the beans. This turned out to be a bit of a challenge as these babies are hard as rocks. The beans were placed in a food safe bag and 'whacked' with a rolling pin. 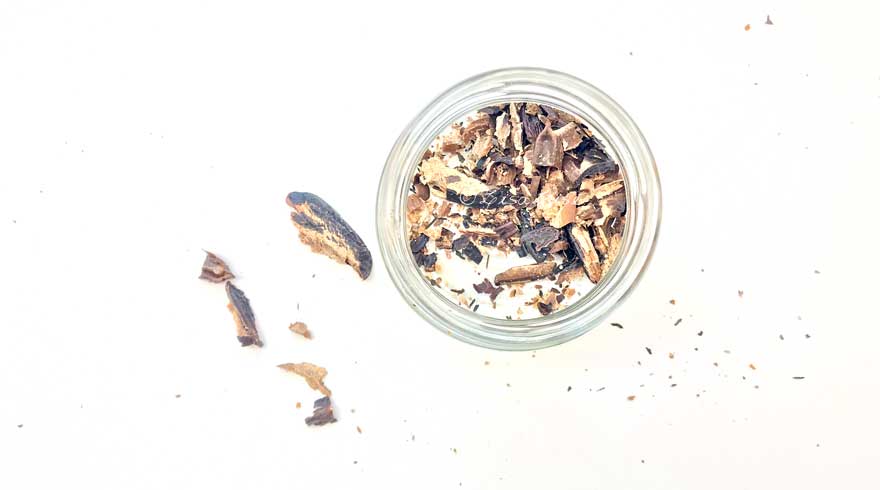 This took more time and muscle than I expected, but it was worth the effort as the intoxicating fragrance was indeed released. Pictured is the result of the whacking.

All the bits were placed in a small jar and jojoba was poured in to cover. 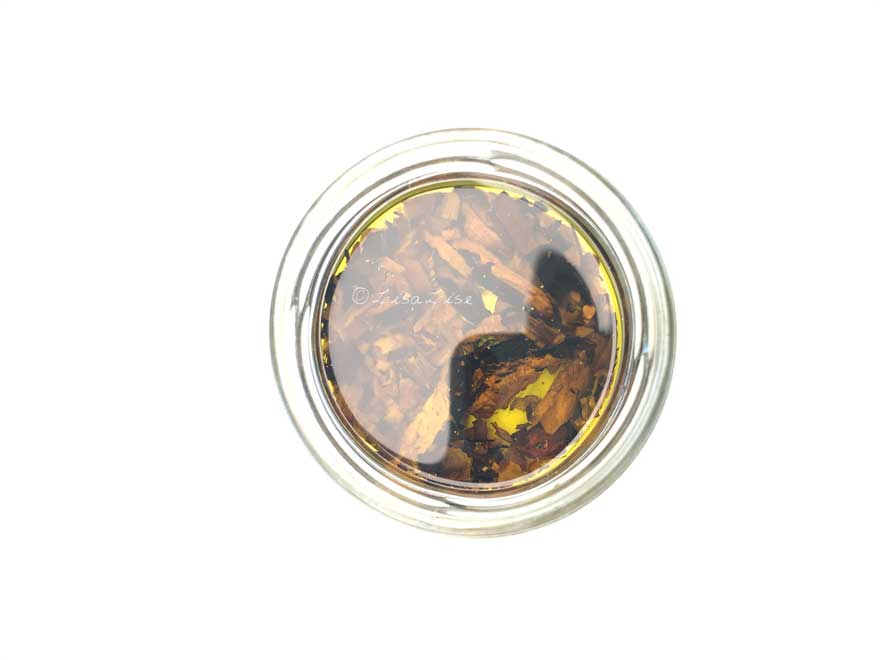 I employed the sun infusion method for this batch and checked the scent periodically. As this is my first time working with tonka beans, I let my nose be the guide and didn't strain until it 'smelled like it was done' (very scientific method). As it turned out, this was after about 6 weeks.

The strained beans were promptly added to an ongoing batch of vanilla-infused oil to give it a little extra boost. (highly recommended!)

The final infused oil has made its way into a couple of balms, a face serum and even a foundation lotion base.

Even though this was a very small batch, I find a little goes quite a long way with the infused oil. It has a lovely fragrance and works well with other infused oils as well as essential oils.

I will most def be ordering more of these.

Want to stay in touch? Please feel free to sign up for my newsletter.

Wikipedia on Tonka Beans
How to Cook with Tonka Beans (Great British Chefs)
Coumarin, the illegal chemical..., McGill, Office for Science and Society

maya said…
Hi Lise,
I use Tonka bean infusion in several of my formulations.
I, however, grind them into a powder and find I get more mileage that way.

I have also re-infused the powder 3 times and still have a beautiful scent.

Tonka beans are also super when making pudding. Plop one of those babies into the milk as its warming up and it lends a beautiful aroma. No vanilla needed. Take the bean out, rinse in water and allow to dry for the next use. They are a gift which keeps on giving!
April 20, 2020 at 9:57 AM

Jade Forest Co. said…
Hi Lise! I love Tonka bean, great fixative. I use a cheese grater to grate them for use. The ones with the tiny holes made for parm cheese work great!
April 20, 2020 at 12:17 PM

Anonymous said…
Hi Lise, thank you for great tip. I have them at home and used a couple of time for pancakes. I grind them with the cheese-grinder, they are hard as rock indeed. I will definitely try this infusion, though cold infusion. Thank you so much.
April 23, 2020 at 9:34 PM

LisaLise said…
@Maya - you are an experienced tonic bean user! Thanks so much for sharing! :D

@Jade Forest - I didn't know it was a great fixative. It will now be finding its way into even more of my things. Thank you so much for sharing your expertise :D

ksd said…
I have made an oil-tonka infusion and a tincture. both smell amazing and can easily overpower other scents in your formula!
For these I chopped up the beans - not easy, as they like to fly away when the knife hits them LOL
I also ground up one bean with a cheese grater and sometimes I just take a sniff of this powder... it's heavenly!
May 14, 2020 at 2:58 PM

Chrys Rocha said…
I sell them and will send you a bunch for free since I am interested in sharing your experiments with my customers.

Shaazia said…
Hello Lisa
Would you mind telling me how much in % can we add to our skincare for face and body formulation.
Thank you
October 23, 2020 at 9:40 PM

Sara Gepp said…
Great article! I just bought some beans from Rainforest Chica who links to this article from her page. Cannot wait to try!
November 28, 2020 at 4:18 PM

LisaLise said…
Thank you Sara! I hope your infusion turns out beautifully -- I have been very happy with this method for infusing tonka beans
November 29, 2020 at 3:59 PM

I see a couple of comments about using grated/powdered tonka beans for infusions. Does anyone have any recommendations for the proportions of grated tonka to use for 100 ml oil?

- also, are there any caveats for applying tonka-infused oil to the skin? Especially with prolonged use, such as in a lotion.
Thank you
September 6, 2021 at 11:17 PM

LisaLise said…
HI Anon - I will readily admit I used these solely for their fragrance as I was intrigued by the ingredient and had not been able to source them prior.
September 7, 2021 at 2:48 PM

Kat said…
Hi There, I have used Tonka Beans for years, but for a totally different purpose. At that time I learned that the beans were good to put in dresser drawers, as a means of keeping pests at bay. It works! After 10-15 years, I am finally noticing the beans have lost their smell, so time to replace. Maybe I'll grind a few and see if there is any residual left in them. And now, reading your blog, I am inspired to infuse some oil too!! Thanks.
December 29, 2021 at 10:59 PM

LisaLise said…
Hi Kat -- thanks so much for sharing! I have also seen the beans used outdoors to keep pests from fruit trees.
December 31, 2021 at 12:27 PM

LisaLise said…
HI Amanda -- If you do decide to try this, use a food processor that you don't care too much about.. I can't say for sure whether it will work or not also whether the fragrance from the tonka beans will remain in the machine. Tonka beans have a powerful scent and may just decide to adhere to the parts of the machine..
September 24, 2022 at 2:38 PM

Unknown said…
sadly i dont have a processor i dont care about i am wondering about an immersion blender? i am just looking for a way to grind tthese into a powder like substance to put in tea bags and soak in oil of anyone has any ideas please let me know thanks so much
September 27, 2022 at 2:10 AM