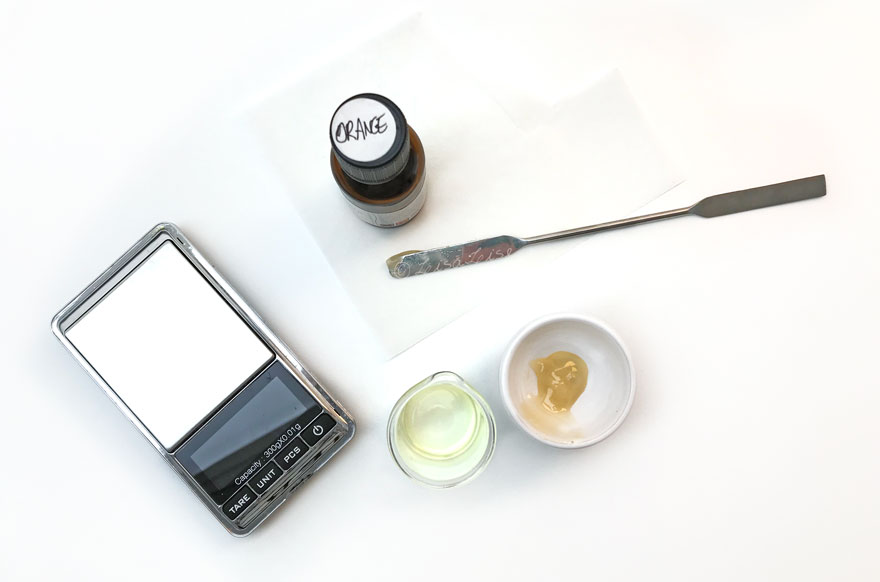 I've been successfully infusing honey with all sorts of herbs, powders, and botanicals for ages now, so that may be why this thought popped into existence all by itself earlier this year: whether it was at all possible to infuse honey with essential oils.

Logic, chemistry, and everything else says no because honey is water soluble and essential oils are, well, oils. But sometimes, I get a burning desire to test something anyway – just in case science and the rest of the world might have missed something.

Pictured above: the first test. Three grams of raw honey and 1 gram of orange essential oil.

Here's a closeup of the container directly after adding the oil. Very clear distinction between the oil and honey. 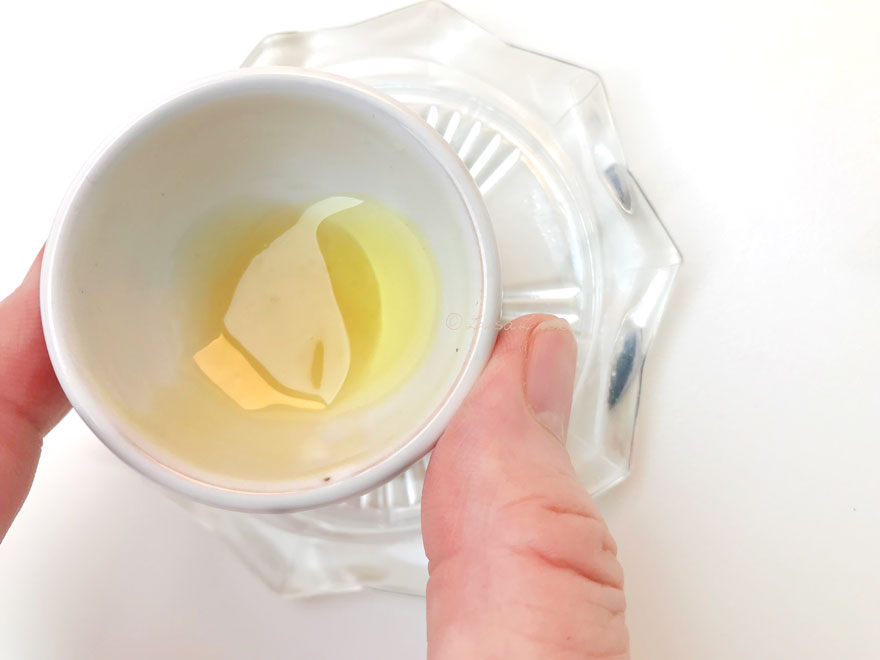 Because this was a bit of an impromptu test, I neglected to think about how I was going to seal the container, but a bit of household cling-film did the job. After tightly sealing the cup, I parked it in my observation cupboard (room temp - no daylight exposure).

It was 2 days before I got around to checking, but to my amazement, the honey had absorbed the essential oils. The cling-film was still intact – nothing had gotten loose – so it didn't look like the oils would have had been able to evaporate.

Here's what it looked like. Nothing floating on top, just a homogenous mass. 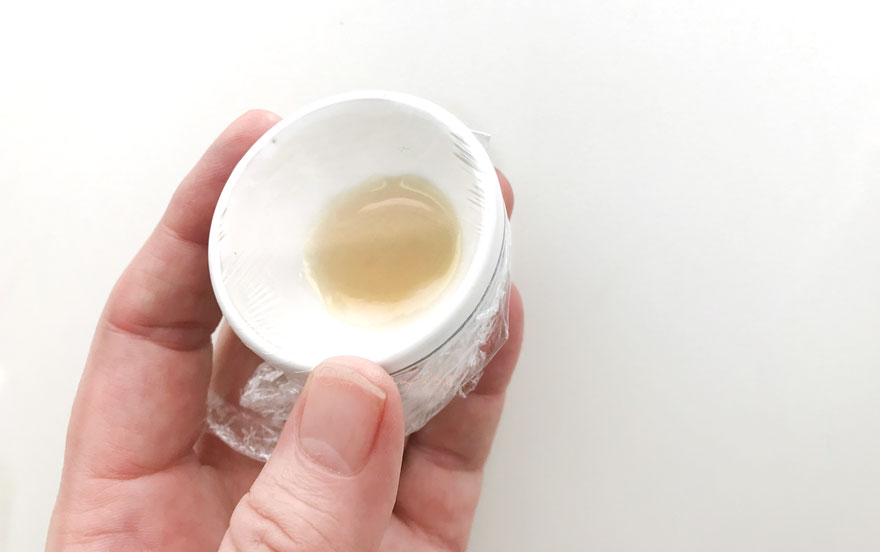 Was someone a little excited to see this? Well, wouldn't you be?

Before announcing to the world I had broken the secret code of getting essential oils and water-based ingredients to marry seamlessly, more testing was in order.

I transferred the honey/EO from the little cup to a test vial (scraping the cup as clean as I could).

The test was then repeated with the same essential oil and 2 different types of honey.  I labelled the vials and let them stand for observation. Pictured below: the vials after 4 months. 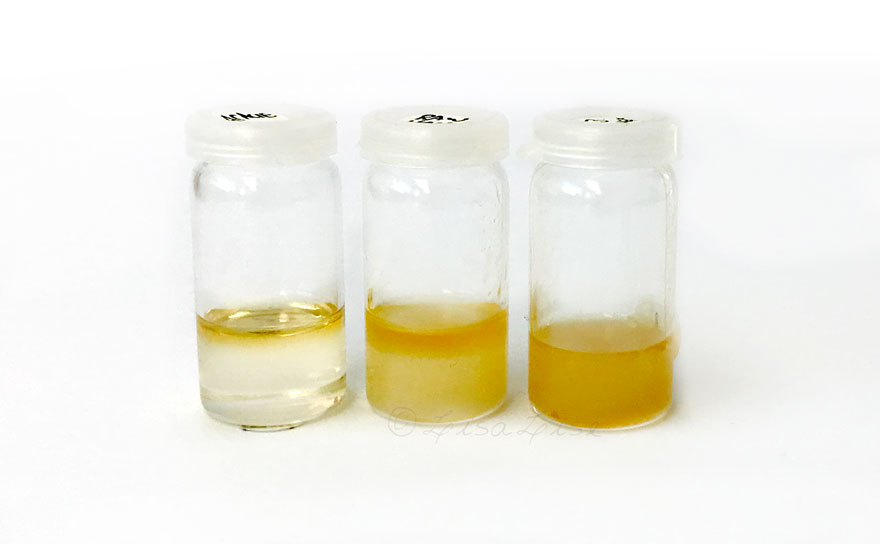 On the left: EO in acaia honey, in the middle, EO in heather honey, and on the right, the transferred original sample. The essential oil is clearly visible in both of the vials on the left, while the original test sample is still homogenous, but there is also loss of product.

Of Course it Was too Good to be True

While this was a fun little exercise, it was also quite educational. I've definitely learned that doing tests with volatile ingredients in cute little ceramic cups using only cling film to seal the container probably isn't the best way of getting a trustworthy result.

On the other hand, I still can't figure out what happened to the essential oil. How could it evaporate through cling film? Another possibility is the small imperfections in the glazing of the cup - perhaps the oils were absorbed by the cup. More testing is in order!

Have you ever thought you'd discovered something amazing  - even if it was only for a brief moment?

Gina said…
It's amazing knowing someone out there having the same trials and curiosity.
August 7, 2019 at 11:57 PM

Relax the Bath said…
Will you take this a step further with different emulsifiers for specific projects?
August 8, 2019 at 7:59 AM

LisaLise said…
@Gina - HI there! yay for you having the same curiosity!
@Relax the Bath - I do have plans of taking this further and that is all I am at liberty to divulge at this point :)
August 10, 2019 at 2:58 PM

Bee happy said…
Did you use the same amount of essential oils? It looks like a lot more was put with the honey in jars
September 14, 2020 at 12:16 AM

LisaLise said…
Hi Anon- yes same amount. The post explains what happened and why it looks like there is more in some of the vials
September 14, 2020 at 3:45 PM

Shauna Rudd said…
Hi Lise! I'm oh-so-familiar with the cling-wrap solution, which is not really a solution -- I've been there too, so many times, lol. I'm not sure how, but essential oils are able to evaporate through cling-wrap, at least that's been my experience ☺️
January 9, 2021 at 6:59 AM

Claire Paul said…
Hi Lisa, love this post!
Did any of the end results have an equal smell of both orange and honey? I’d be interested to know if this would work in making scented candles. Thanks!
January 22, 2021 at 10:37 PM

LisaLise said…
HI Claire Paul - The scent was there but it's impossible to say if the honey picked up the scent as the 2 never blended.
January 25, 2021 at 11:40 AM

Dave said…
Great Job! I have been working a bit with honey and EO as well. I have a couple suggestions from a successful trial I did here at home.

1. Get a yogurt maker.
2. Silicone mold
3. Regular honey from the store (;) the one with the little bee on it)
4. Crystalize the honey. I.e. leave in the fridge for a really long time until it's hard.
5. Your mold should hold at least 250-300 ml in volume.
6. Put your honey in the mold and tamp it down so it fills the mold
7. Add 1 container 15 ml EO until it's right up to the top.
8. heat up the honey and EO mixture for about 24 hours.
9. your solution will have a lovely aroma.
10. I used ginger
11. After the mixture is pure liquid the honey and the EO will be mixed.
12. Remove from heat and store in the fridge.

I'd love to see how yours works out mine is in day 2 now and has not separated in the least and it tastes amazing. I also calculated the exact dosage for my body weight which is about 0.3 ml.

LisaLise said…
Hi Dave - Thanks for sharing this. I do have a couple of concerns:
'Regular honey from the store' isn't very clear. Which country do you live in? Your description of the reaction of honey (storing sold, crystallising) is not going to happen with every kind of honey.

If you are looking to make ginger tasting honey, it might be a more fruitful idea to infuse honey with ginger directly.

David L. Asselstine, PSW, M.NLP, CLC, said…
I see what you mean. So, it was organic honey bought from the store. I live in Ottawa, Ontario, Canada. Absolutely, it won't happen with every honey, in fact, I was reading that the pasteurized honey won't do this because of the additives. Yes, it does compromise the integrity of the honey and essentially I was left with a surgery , golden-coloured solution of sugar, water , and essential oils. Again, I wouldn't ever tell anyone to ingest essential oils for obvious reasons. Talk to your doctor first in all cases. I've been playing with other methods and the best one I've had with the most temperature control is using a glass bowl and with the tap getting the water to about 35°C then having my honey and essential oil in a secondary container (i.e. water bath). That seems to be doing the trick. My next storage related issue is going to be a bit of a challenge but I am going to make a temperature controlled cabinet so that I don't have to constantly recrystallize. Other than that, the new product is much better dissolved and I didn't have to compromise the invertase in the honey.
November 26, 2021 at 4:03 PM