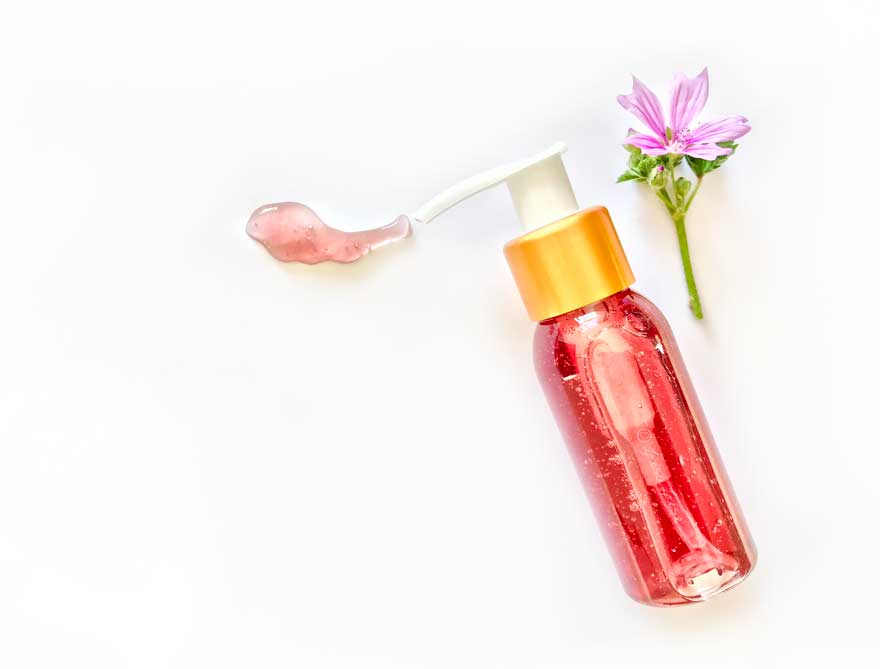 Here's one of my favorite cleansing gels. I've been making and using it for years. It's gloriously simple to make, works beautifully, and leaves my sensitive skin perfectly clean without a trace of dryness.

The gel features that plant you see lying next to the bottle up there.

Mallow happens to grow wild in my garden. It pops up all by itself in places of its own choosing and produces glorious purple flowers one would think had nothing more to offer the world than a bit of eye candy.

Ahhh, but there is much more to this plant than pretty purple flowers.

Today we're going to look at some of the magic mallow contains.

The history of uses of this plant goes back so far no one is quite sure when it began. Mallow is an edible plant that can be used a plethora of ways.

It is believed the earliest consumption of mallow goes back as far as 3000 BC (ref).

And although the young leaves were boiled and consumed as vegetables (ref.), mallow has mostly been prized for medicinal purposes.

There have been many ailments this plant has been prescribed for throughout history: gastrointestinal problems, dermatological ailments, oral diseases, pain, menstrual problems, the list goes on.

If you want to do a little reading, scroll down the page on this article for an overview of mallows medicinal uses throughout history. It's a pretty impressive list.

This humble plant has an impressive list of chemical constituents:

The Mucilage is Magic

Mallow contains up to 7.4% mucilage which is present in the leaves, flowers, and even the roots (ref).

I used to think mucilage was one thing, but it is a whole collection of things. Some of the mucilages in mallow are:
Why is this important?

Because the mucilage is an important part of mallow's magic. It is the mucilage that is mainly responsible for mallow's therapeutic effects (ref.)

The mucilage is what makes my cleanser so ideal for sensitive skin.

Although you might have gotten the impression I pluck the plants from my garden to make infusions, glycerites, tinctures, and powders for my cosmetics, I don't. The organic mallow I use is purchased dried from a supplier of herbs.

The plants that decide to appear in my garden are all allowed to function as eye candy – whether they are outside, sitting in a small vase on my windowsill or participating as part of a photo for this blog.

Do you use mallow in your skincare? What kinds of products do you include it in?

More about Mallow and Mucilage

Unknown said…
Hi Lise, I had no idea mallow has so many beneficial qualities! It grows wild (and crazy) around my house too. Thanks for enlightening me.
January 17, 2019 at 1:37 PM