Mallow as a Colorant – The Bad News and The Good News 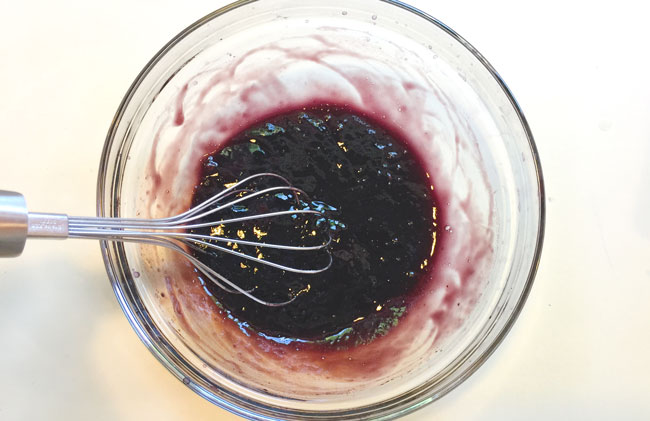 Last year, I spent a bit of time exploring the properties of Mallow (INCI: Malva Sylvestris) – mostly to examine whether or not there was any truth to be had in the claims of it being an all natural hair dye.

According to folklore, mallow is so rich in color that it can even cover grey hairs.

How could one not be tempted to find out if there was any all-natural, hair-coloring joy to be had from this plant?

Unable to source any 'folklorian' how-to's for using mallow as a hair dye, I created a concentrated gel and proceeded to experiment with different application methods, leave-in times, temperatures, etc.

After several tries and many hours of wearing the gel, my grey hairs continued to emerge unchanged (albeit noticeably softer) with every rinse-out.

But Color, it Can

Even though the color didn't 'take' to my hair, all was not lost. There were several lessons to be learned about mallow's coloring abilities.

For instance, the same mallow gel can create tints ranging from light, fresh blue to a deep plum color – depending on what it comes into contact with.

Mallow can also stain everything from sinks and floors to towels and clothing.

Mallow stains on towels are a little magical –  they actually change hue and deepen in color over time.

I saw this happen repeatedly by merely observing my 'special mallow towel' throughout the entire hair coloring experimentation period.

If mallow mixture/gel is not completely rinsed out, it will immediately leave a light brownish stain on the towel.

If not washed out, the stain 'develops' over a period of days and becomes a clearer blue tint.

Below: the special mallow towel with a selection of stains for your viewing pleasure.

Every single mallow stain - whether fresh or several days old - washed out completely with a normal 'whites' cycle in the washing machine.

So, although there was a wide array of tints and color to be gotten from mallow, none of it was permanent.


Into The Cupboard We Go

After a few weeks of experimentation, the remainder of the mallow gel was placed in the cupboard, waiting to to be either used or discarded.

One day, inspiration struck, and I tried it as a face cleanser.

I'll tell you all about how that turned out very soon.

LisaLise said…
Hi Signe - what a great question! I would imagine it would be quite effective, although I am not sure if you would be able to count on stability of the color. It would depend on what it is mixed with, temperatures etc. If you give it a try, I'd love to hear how it turns out - most especially if the color has staying power.
January 15, 2016 at 11:04 AM

María said…
All the plants and fruits (berries) having this purple-blue colour (due to the antocyanines) keep the hue in acid pH. The soap, being alkaline, will turn this colour into a brownish hue :)
January 15, 2016 at 7:32 PM

Bambú said…
I think Í know you :)
I use hibiscus, which has a lot of antocyanins too, in my henna mixtures because it releases its Red pigment in acid pH. It can be used to make the stain last longer too
January 26, 2016 at 3:30 PM

LisaLise said…
HI Bambú - I'm VERY interested in working with hibiscus and have actually just put in my first order for it. Do you only use it as a hair colorant?
January 27, 2016 at 12:25 PM

Bambú said…
I use it mainly in haircare because it has got a lot of mucilages that smooth the hair. It is a must in my henna recipe (if you want to see that, ask for the link, but it is in Spanish). In addition, antocyanins are quite good antioxidants and I have seen hibiscus infusion in anti-age lotions recipes. I'm planning to make a hair mask with hibiscus infusion an sidr to fix my henna coloration, too.
January 29, 2016 at 11:53 AM