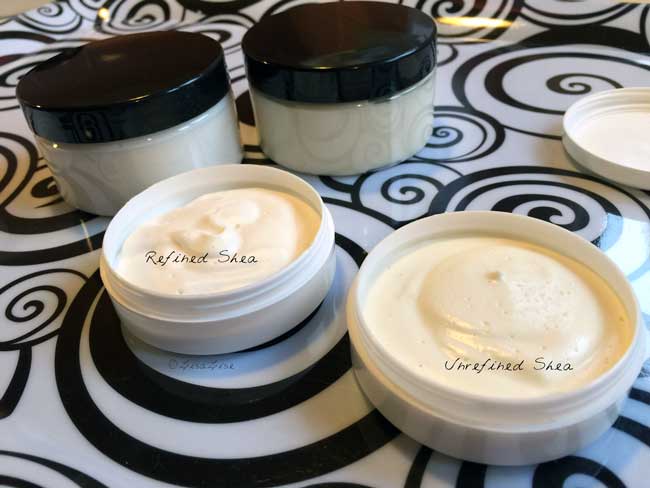 Here's the first test batch in the refined vs unrefined shea comparison test. You really have to look closely to see the difference - both are airy, light and even smell almost identical.

True to its reputation, the shea threw me an unexpected loop.


I usually make whipped shea according to this method, but wanted to see how the unrefined shea behaved when heated, so this first batch was made differently.

I used 10% fractionated coconut oil and 10% jojoba with both butters.


As I also wanted to add scent, my formula for this batch was

The butters were allowed to reach room temperature, weighed up and added to separate beakers with the oil.

Both were placed directly on the heat source and melted slowly over low heat. When I say slowly, I mean snails pace. The heat is set to the absolute lowest and the mixture is monitored constantly. I also have a habit of testing the temperature by regularly placing the beaker on my palm. The melting process usually takes 5-10 minutes.

Here's how I melt 'in stereo' (this pic is from a completely different session and product, but you can get an idea..) 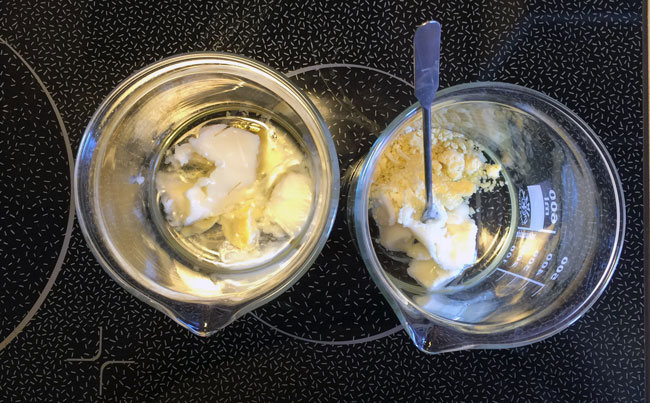 While the unrefined shea behaved beautifully during the melting process, the refined shea went completely grainy as it was melting.

That's a first for me. I've only seen shea go grainy after it has been heated/melted and incorporated into a product.

A possible reason: perhaps the refined shea experienced some degree of heating and cooling during packaging and transport.

Other than the little extra surprise, both butters melted at the same speed and both reached liquid state at the same time.

The melted mixtures were placed in the refrigerator to cool to 15º C, then both whipped until the desired texture was achieved.

I didn't time the whipping, but it was my impression that both butters achieved the desired texture within approximately the same time.

Side note on whipping butters: It is possible to introduce extra 'lightness' and airiness to a whipped butter by alternating the whipping and cooling process repeatedly as the mixture cools. It's also quite a bit more work.

1% essential oil was added to both just before whipping. I wanted to see if I could create a blend that would successfully mask the heavy, cocoa-buttery scent of the unrefined shea.

Here's the combination I used


It almost worked too. The natural scent unrefined shea was still slightly detectible, but an extra 4 drops of frankincense seemed to do the trick.

Time will tell if this blend of essential oils has the necessary staying power.

Next time, we'll look at how these whipped butters compare with use.

How do you mask/work with the scent of unrefined shea?
20.4.16
Labels: Oils and Fats Product Development Research Roots Formulating

Anonymous said…
I am going to have to try this! Sounds amazing. My Shea never gets airy but I don't think I have my ratio right. Thanks for great instructions. What do you use to whip the butters? JNC.
I wish someone would come up with a small stick blender that would work with small quantities of liquid. 🙃
April 20, 2016 at 7:54 PM

LisaLise said…
Hey there JNC! Good to hear from you! I use a handmixer to whip the butters, but I would love to find a small stick blender too!
April 20, 2016 at 8:00 PM

Signe said…
How do you get your butters so soft??? It doesn't matter which method I use to make mine, and they are always much more harder. It cannot be that much colder here in Finland than you have in Denmark, that it would make a such a difference.

LisaLise said…
Hi Signe - Basically I treat shea like a sensitive soul - I baby it and coddle it - no sudden temperature changes - ever - that really seems to help. When whipping, I slowly build speed. When whipping, I try to limit how long I whip at a time. It's a lot of little things I guess..
April 21, 2016 at 7:43 PM

Eliza said…
I use 70% unrefined shea and 30% oils. In the 30% oils I use 1-1.5% of essential oil. In all except my unfragranced, the smell of the shea does not come through. However, I love the smell of unrefined shea and the unfragranced is one of my best sellers - so, I'm assuming my customers are fond of it as well. I have never had a whipped batch turn grainy on me. I also use a stand mixer with the whisk attachment.
April 22, 2016 at 4:27 PM

María said…
I can't, I really can't stand it. My skin simply doesn't like it. And I cannot avoid crystallisation for the life of me. Is it safe to put the glass beakers on direct heat on the hob? I'm always afraid they shatter.
April 22, 2016 at 11:38 PM

LisaLise said…
Hi @Eliza - I think you are the first person to tell me they like the smell of unrefined shea. I am tempted to ask where you buy yours. :)

Hi @María - Giggle, snicker... I totally hear you! I really do understand why you aren't a fan of shea. There are some who simply don't 'get along' with shea in any way shape or form. As for glass beakers on the hob. These are made to take the heat. That said, I never heat quickly. I've worked with glass beakers forever - I even whip butters in them - but they do get a bit scratched after a while when you do that. The only time I ever shattered my beakers is the time I was transporting ALL of my beakers to a different storage space and dropped the box on a tile floor. Only 2 beakers survived that ordeal.
April 25, 2016 at 12:23 PM