The Serious Make-Up in The Purse Test 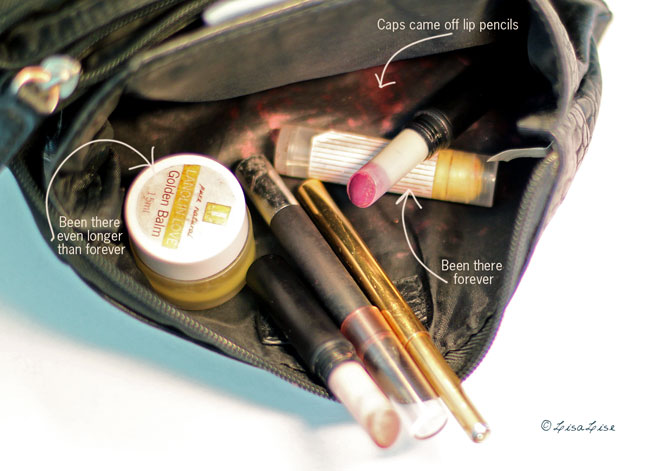 I know this isn't the prettiest sight you've ever seen on this blog (or probably anywhere else), but what you're looking at here is hard science – kind of.

Sometimes, my product testing gets ugly.


Above, the visible battle scars of make-up testing. These items have been dragged around through all kinds of winter weather and summer heat, dropped on the floor several times, mixed and mingled with 'purse grunge', and put through just about every knock-down and drag-out kind of mistreatment I can think of.

Here's the nitty gritty on each item. If the name has a link, click to read about the making of this product.

Lanolin Love Golden Balm
Been there since: March 2013
How's it being used: For cuticle and hand moisturizing during long drives (when I'm not behind the wheel)
How's it behaving: still going strong despite the banged up label. The jar is also great at staying tightly shut, keeping the product 'purse dust free.

Lipstick
Been there since: March 2014
How's it being used: Lipstick
How's it behaving: still going strong although the cap is starting to loosen - it doesn't make a sharp 'click' sound any more.

Eye pencil
Been there since: May 2011
How's it being used: emergency eyebrow pencil and eyeliner
How's it behaving: starting to get a bit hard to apply due to drying out/hardening. Cap has a tendency to come off on its own.

Cocoa Loco Lip Balm
Been there since: August 2013
How's it being used: lip balm and occasional on-the-go cuticle moisturiser
How's it behaving: like a champ - still going strong but the label is showing clear signs of abuse. Cap still closes properly and stays put.

Lip pencil
Been there since: February 2012
How's it being used: It's not - it's the smeary reddish stuff that's all over the inside
How's it behaving: it's got great staying power - on the bottom of my purse. I threw out the pencil after discovering the cap that had come off and caused this mess.

Olivia J said…
It is funny how we read about germs and such and when we are making or applying things onto other people, sanitation is the number one priority. Yet, when it comes to our own stuff, WHO CARES! LOL As long as I am alive, the bacteria and such won't kill me! :-D
September 23, 2014 at 2:58 AM

LisaLise said…
Olivia you are so right - and we're really being unfair to ourselves because we deserve the best, don't you agree? :D
September 24, 2014 at 11:23 AM