Fractionated Coconut Oil - The Oil That Isn't There 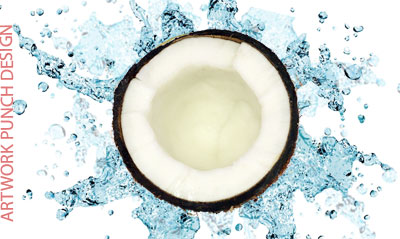 I know what you're thinking...

The main reason for fractionating coconut oil is to extract lauric acid, which coconut oil happens to contain a healthy proportion of. Lauric acid is interesting and special because it converts into a fat called monolaurin in the body. Monolaurin is interesting and special because it "may be useful in the prevention and treatment of bacterial infection" (read more here) and is otherwise only found one other place in the entire world – human breast milk! Lauric acid is therefore particularly useful for foodstuffs such as baby formula. It also has medical applications.

What Happens to the Rest

Fractionated coconut oil is tolerated by all skin types – even sensitive – and has a very long shelf life. It functions as a skin conditioner by providing a protective layer that helps lock in moisture. It also adds 'slip' to products as well as some thickness. In make-up it adds a silky feel. In short, is a wonderfully neutral oil that is easy to partner with other ingredients. It is only within the last year that I have worked with fractionated coconut oil, so my experience with it is, as yet, a bit limited. It is unquestionably the runniest and mildest oil I have ever worked with.

The Look:  completely colorless and crystal clear. In the bottle, you'd swear it wasn't oil but some kind of 'slightly thick water'.  It doesn't bring any color to a mix.

The Scent: is.. well, not there. There's simply no discernable scent. Having an ingredient that is so neutral it doesn't have to be 'taken into consideration' when being added to a formula is a pleasant change for me.

The Feel: as neutral and 'quiet' as the look and scent. It is non-greasy and just seems to melt right in, leaving a silky smooth feel.

The Positives and Negatives

Fractionated coconut oil is neutral to the point of being invisible. Even though it cannot function as a stand-alone and doesn't bring vitamins or any nourishing extras, its ability to take a back seat to everything else in the mix has me reaching for it more often than I expected. I've tested it in several of my own personal oil blends, a couple of creams, and as part of the binder for my pressed eye shadows. It has delivered every time. I realize it will never be the star ingredient, but it is quickly becoming a trusted staple for 'background use' and I understand why it is so popular in the world of commercial cosmetics.

The safety of caprylic/capric triglyceride has been checked thoroughly by the Cosmetic Ingredient Review (CIR) Expert Panel. They have evaluated data on 2 occasions (that I have been able to find info on) – most recently in 2001. Both times the conclusion was that fractionated coconut oil was 'safe as a cosmetic ingredient in the present practices of use'.

Anonymous said…
I wonder, is it edible?

And another thing: Although I like the idea of using 'the leftovers' as it were, so as not to waste the caprylic/capric triglyceride left over when extracting the lauric acid (do you know how that's done, by the way? Is it a heat treatment?), I wonder why you wouldn't prefer to use an oil which you know ALSO has some umph in your oil blends?

@Hi - Thanks for your kind words. You ask great questions! Yes, it is edible and is used in several areas of commercial food production.

The most popular method of extraction (read: cheapest and most effective) is steam distillation. Kinda cool that the extraction method is the best of both worlds. Mind you, I haven't done in-depth research on the specific processing techniques (but will be checking into this more now that you got me all curious).

As for the missing 'oomph factor' you mention, this is one of the reasons I hadn't really chosen to work with it before relatively recently. It was my quest for a light and effective eyeshadow binder that got me started with it. Once the bottle was opened, I couldn't help trying it out for other things - just to get properly acquainted with it and see what it could do. The fact that it is tolerated by even super sensitive skin is a huge plus. I have quite a few clients that fit this bill, and it just gives me another option when putting together a formula for a client with special requirements.

melissa said…
I love using organic coconut oil for my hair and skin. I also consume about a tablespoon in my coffee every morning and it gives me great energy throughout the day and helps with my digestion. It's awesome stuff!!
March 21, 2012 at 12:49 AM

LisaLise said…
@Melissa - agree! Sounds like you are getting some great benefits. Are you using fractionated coconut oil or the 'whole oil'?
March 21, 2012 at 10:21 AM