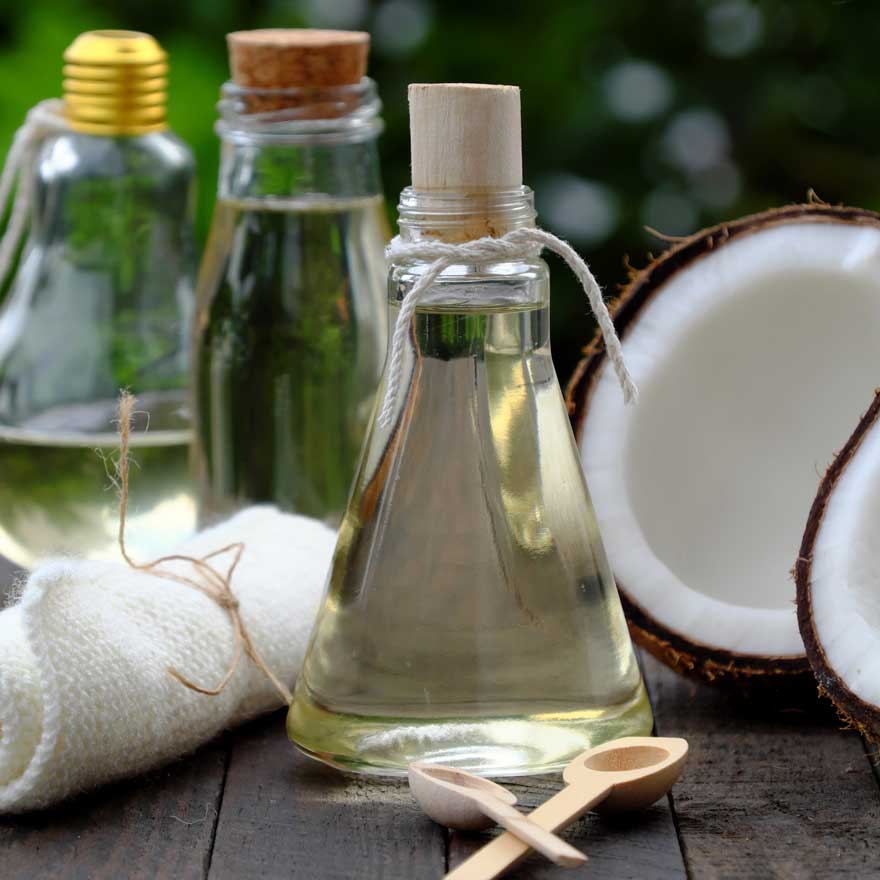 While teaching this course last summer, an interesting question popped up from one of the students.

We were discussing oils, one of which was fractionated coconut oil.

Apart from the question being as long as a son-of-a-gun, it's a really great query:
'What's the difference between Caprylic/capric triglycerides, fractionated coconut oil and MCT (medium chain triglycerides)?'

Because MCT was Trending

As it happened, medium chain triglycerides (MCT) were trending (and yes, cosmetics ingredients trend just as much as trends come and go in the world of fashion, cooking, etc).

The circulating claims were that MCT was 'far more natural' and 'absorbed much faster by the skin' than fractionated coconut oil or caprylic/capric triglycerides.

Let's have a look, shall we?

A great place to start checking out something like this is by looking at the CAS number of each ingredient. A CAS number is a unique number assigned by the Chemical Abstracts Services (CAS) to a chemical substance.

There is a CAS number for every chemical substance described in open scientific literature since 1957 and to present day. This includes organic as well as inorganic compounds.

In short, you will find every cosmetics ingredient has a CAS number.

So What's the Difference between these 3 ingredients?

Here are the CAS numbers for the three ingredients in question:


Hmmm. It looks like the only difference between these 3 is the name they are sold under. The chemical composition would appear to be identical.

How to Check the CAS number of an Ingredient

If you want to check the CAS number of any ingredient, simply type the name of the ingredient followed by 'CAS number' into Google and you shall have a reply in nanoseconds.

Do you check CAS numbers?

25.5.20
Labels: How To Ingredients Oils and Fats Research Tips

Two Sheep Soapery said…
He, he, love this Lise. Great post & very useful. I’m a avid researcher. I think I spend more time looking at this kind of stuff than making things. My mind is like a computer page with all the tabs open sometimes. Then it crashes. Lmao. I also find various suppliers charge various price points for the same things so you have to very savvy working it all out. What a headache. Google certainly is your friend, most times, looking up those CAS numbers, botanical names, common names, INCI & working it all out. Xxx
May 25, 2020 at 4:26 PM

LisaLise said…
Hi Two Sheep Soapery - Thanks for your always positive comments. I may not be quite finished researching this as it was pointed out to me that the CAS numbers are incomplete on these references. So there may be an update forthcoming. It seems there is always more to learn! Stay safe and healthy :D
June 4, 2020 at 8:27 AM

Unknown said…
I worked for a well-known organic retailer in the supplement & body care department and I knew all of those things to be the same thing. I was surprised to know they were marketed differently
June 9, 2020 at 5:49 AM

LisaLise said…
Hi Unknown — thanks for sharing! Lots of confusion about these ingredients— I’m still looking into this as they can be sourced from either palm or coconut
June 10, 2020 at 7:48 AM

Lenny said…
You answered my guestion. I wasn't able to find the answer myself so, thanks for your post. Where can I find CAS numbers? Is there a source that had a CAS number database?
July 2, 2020 at 10:33 AM

LisaLise said…
HI Lenny - Thanks for your comment. I am STILL researching this as I keep running into a few conflicting bits of information, so there will be an update as soon as I can find the answers to those! :D
July 5, 2020 at 1:36 PM

Unknown said…
So timely -- thanks for everyone's comments!

I'll add ANOTHER dimension, as I'm working on a new natural snack food product. Sounds like you're all externally focused but I'm hoping some of your experience can help me:

Do you know the difference between coconut glycerin and the others you mentioned? I never did well in high school chemistry :)