What to Do When Your Infused Oil Goes Bad 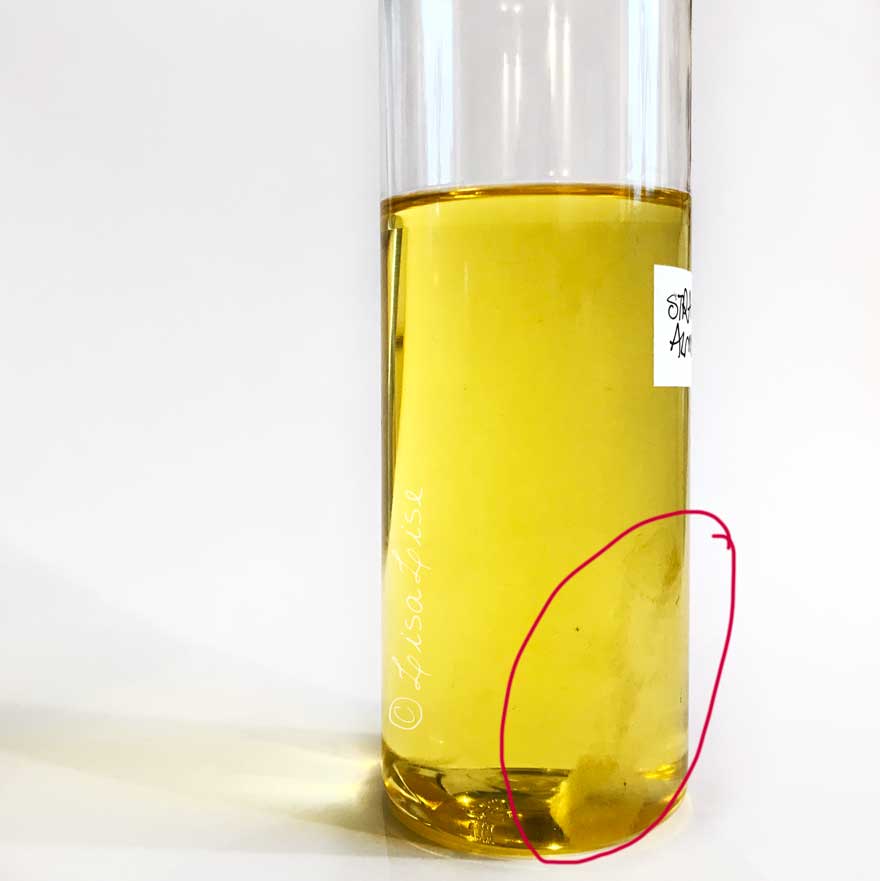 We're going to start off the New Year with 'a few things that go wrong'. Some of the examples of failed things I will be sharing with you in coming posts have been accidental, but a great deal of them have been entirely intentional.

Believe it or not, today's fail took a surprisingly long time to achieve, and to me, it's a success!

Why Failure Can be a Success

I've been on a fail-creating mission of numerous things for a while now-- partly because I believe it is easier to understand how to not fail if you know what makes for a fail, but also to test limits on some of the (admittedly crazy) experiments I undertake with both ingredients and methods.

Working with fresh foods as cosmetics ingredients, combining and infusing things that (on paper) shouldn't work, trying out different Hurdle Technology ideas, and generally testing limits of various ingredients has been so enlightening and dished up so many surprising results that I have gotten more than a little hooked on continuing down this path.

I understand totally if you are tempted to think so, but assure you, it isn't complete madness. Maybe it's only a teensy bit madness, and that's ok.

Fails (of all types) make for important lessons that help you become better at what you are doing. If you work with plants, make your own extracts, and do your own kind of roots formulating, then fails provide you with invaluable information.

Use the fails to make more successes!

As for today's example... it was (honestly) unintended.

It may sound all wrong to celebrate an oil infusion 'gone off', but when I saw the bottle pictured above at the beginning of 2018 (January to be precise), I got a little bit excited.

The bottle is a sun-infusion of freeze dried strawberries in sweet almond oil from early Fall, 2017. This is one of those ingredients combos that (on paper) shouldn't work. I can confirm it doesn't. It is not possible to capture any kind of strawberry scent (or color) in oil using this method with these ingredients.

As I rarely discard an experimental infusion, the oil had been put to use in a few salt scrubs and the likes.
My initial thought looking at the unexpected 'growth' in the bottle was that it had not been filtered properly, but deep down, I knew it was filtered properly. It was perfectly clear the previous time I used it.

The bottle was returned to the cooler with an extra label ('DON'T USE - MAYBE WONKY') and allowed to sit for a few more months for observation.

When I pulled it out again, it was unchanged.

Looking back through my journal notes, I saw the note on the side of the page. The seal of the package of strawberries (purchased from a local supermarket) 'seemed to be compromised but hard to tell for sure' and that the contents were 'ever so slightly sticky - keep under close observation'.

It's easy to conclude that moisture was introduced to the mix causing the wonkiness - end of story.

I have made numerous oil infusions using fresh material (such as rosemary) that has not gone wonky. In short: this would need to be repeated a few times with the same result before we could conclude anything for sure.

Meantime, the bottle is still being kept for observation and my latest peek at it (Jan 2020) shows no development. The scent is neutral, the color unchanged, and there has been no change in the 'growth' in the bottle. I'll give it until summer before deciding what to do with it.

How long do you keep your experiments and tests on hand for observation? Please share in a comment below.
6.1.20
Labels: How To Hurdle Technology Ingredients Joyous Outburst Oils and Fats Research Roots Formulating Tips

Thank you so much for documenting and celebrating your "fails". I have to remind myself what great learning opportunities they are. I am keen to make my own flavour oils for lip balms as essential oils cannot always be safely ingested. I was thinking that freeze dried fruits would be the perfect solution but you mention that no colour, scent or flavour was transferred to the oil. Was that just with strawberries or have you found that with other ingredients too? I have successfully made vanilla infused oil and am keen to branch out.

LisaLise said…
HI Luella - Thanks for your comment and question. Look for ingredients where the flavour constituents are oil soluble. Things like vanilla, tonka beans, and coffee beans are useful. Fruits are a bit trickier, but not impossible. I'd use dehydrated fruits that have some fatty content (bananas for example) - be sure there are no additives (no preservative, color, sugar etc). :)
May 31, 2022 at 5:04 PM

Doorkeeper Ministries said…
Today I tried infusing oils for the first time. I used organic Helichrysum flowers and I used the heat method (double boiler over stove). I am afraid I may have let it get too much heat. After almost 2 hours over a gently simmering pot, it started to give off a very strong odor and the strained oil is very dark. I'm new to this. If it got too hot do I need to throw it out? Thanks so much for your help!
Kelly
January 2, 2023 at 3:00 AM

LisaLise said…
Hi Kelly - Thanks for your comment. From your description, it does sound like there was too much heat. I wonder if you had a thermometer to check the temperature of the oil? I often leave a candy thermometer in the mixture during infusion so I can check the temperature regularly. The heat infusion method does require babysitting if you don't have a temperature regulated set-up (such as a sous vide, yoghurt maker, etc). The fact that the door became very string and the oil very dark sounds concerning. If you have enough to do a second batch, I'd try making it again (being very mindful of temperature) and see if the result is better. Don't toss the first batch until you have done the second one and can compare. Best of luck with it!
January 2, 2023 at 1:26 PM