Powder is Not the Same as Dry Extract

Sometimes, the use of a single incorrect word can lead to a failed formula, miscommunication, frustration, foot stamping, and hair pulling.

This particular example took somewhat longer than I'd like to admit to solve, but it finally did get solved, and it was in large part due to a very helpful and informative manufacturer.

Pictured above: soapnut (or soapberry)
Today's lesson: soapnut powder and soapnut dry extract are not the same and will produce 2 vastly different results.

Breaking Rules and Making Mistakes - Not the Best Start

For as long as I can remember, it has been my policy to ensure I had more than one source for any given ingredient.

In this instance however, I made 2 major mistakes:
1. I assumed what I was looking for was commonly available
2. I asked for the wrong thing

The asking for the wrong thing part is kind of my own fault for not speaking enough languages and having to visit some sites through Google Translate.

But determination (or is that stubbornness?) kept me going.

After much searching and unsatisfactory samples from a few sources, help presented itself via a contact on social media – I was put in touch with a producer of soapnut products.

And then everything started going in the right direction.

I learned soapnut was produced in numerous forms, among these: powder and dry extract. It wasn't long after that samples of each arrived at my doorstep.


Testing the Difference Between Powder and Dry Extract

On the left is the ingredient I started out with. It has a markedly lighter color and more pungent, vinegary scent than either of the samples to the right.

When I asked the producer about the color and scent differences, I was enlightened as to their production processes and quality requirements for the different products they produced.

A sensory test (rub between fingers) did not reveal much. The feel of these 'powders' seems close to identical.

But there is a marked difference in how they behave: 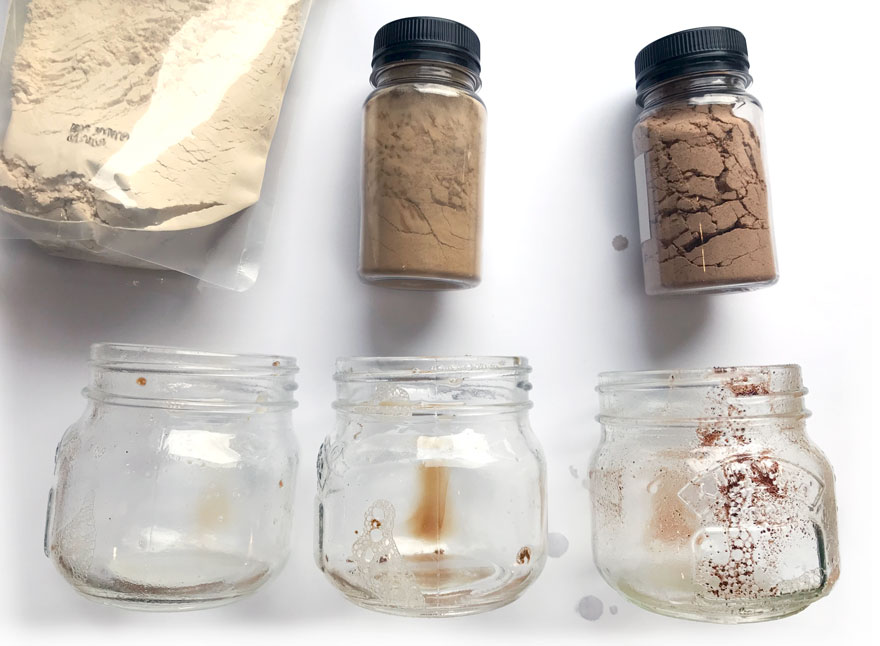 To test this, equal amounts of 'powder' were drizzled into 1 dl of distilled water and allowed to sit for a few minutes. The jars were then agitated (swirling the liquid around for a few seconds).

The liquids all produced approximately the same amount of suds, but pouring the liquid out revealed the main difference between powder and dry extract.

The residue in the jar on the right shows why using a powder instead of a dry extract will leave a gritty, sandy, and unpleasant feel.

It's amazing how a single incorrect term could have caused so much misunderstanding and frustration, but on the other hand, it is this kind of situation I consider a friendly reminder that there will always something new to learn.

And as for the helpful manufacturer, please stay tuned to meet him and learn about his world of beautiful, organically grown ingredients.

Have you ever made the mistake of asking for one ingredient when you really meant something else? Please share in a comment below.
3.4.18
Labels: Ingredients Roots Formulating

Irene M said…
Love this article, thanks Lise! I have lots of botanical powders here and have always wondered how they differ to powdered extracts. Would the benefits be similar even though the powders don't dissolve fully?
April 9, 2018 at 1:34 PM

LisaLise said…
HI Irene - You ask great questions. I am ASSUMING an extract has more to offer as it is more soluble, but please dont hold me to this one as I haven't finished researching it fully yet. :D
April 9, 2018 at 2:10 PM

Gaba said…
As always, your articles are very informative, thank you for all the inspiration. A little question: what about the aloe vera powder? It is water soluble, right? So, in this case, there's a difference btw the powder or eventually an aloe extract? What's the main difference btw a powder and an extract, generally speaking? The way they are processed? Sorry if it's a nonsense question.
April 17, 2018 at 7:44 AM

LisaLise said…
Hey there Gaba and thanks for your comment. Your question is relevant and definitely not a nonsense question.

I have seen aloe vera powder from different sources (suppliers) - some is freeze-dried, some is sold as food supplements. I have only seen it as water-soluble. Whether or not it is an extract depends on the production process. Some are mixed with maltodextrin to avoid clumping (straight up aloe and will clump like the dickens).

Your best way of knowing the properties of the powder you have purchased (or are thinking of purchasing) is to ask the supplier whether or not it is an extract or powder. In general, an extract will dissolve more readily and completely than a powder
April 20, 2018 at 11:09 AM

Mia Chae said…
Hey Lise!
This post is right on time! I recently perfected a formula for a product I'm releasing for summer...It's oil-based and I would love to add a fruit extract powder to it.

Do you have experience with fruit extract powders in oil? The manufacturer thought this would be difficult but I'm hoping I can make it work. My next option would be more like a cold maceration and then filtering out the sediment. I would love your thoughts!
April 27, 2018 at 9:13 PM

Febe said…
Great experimentation! Thanks for doing this. Where did you get the Soap Nut Extract? I am having a hard time finding where to get it.

Thank you for this wonderful article. I'm about to create an extract out of a powder. The information you have provided is very helpful! I have a question: I will create my extract in distilled water, and will let it rest for about 2 weeks time. Shall a preservative be added from day 1, correct? Also, is it ok not using glycerine?
Thank you.
September 22, 2021 at 2:43 PM