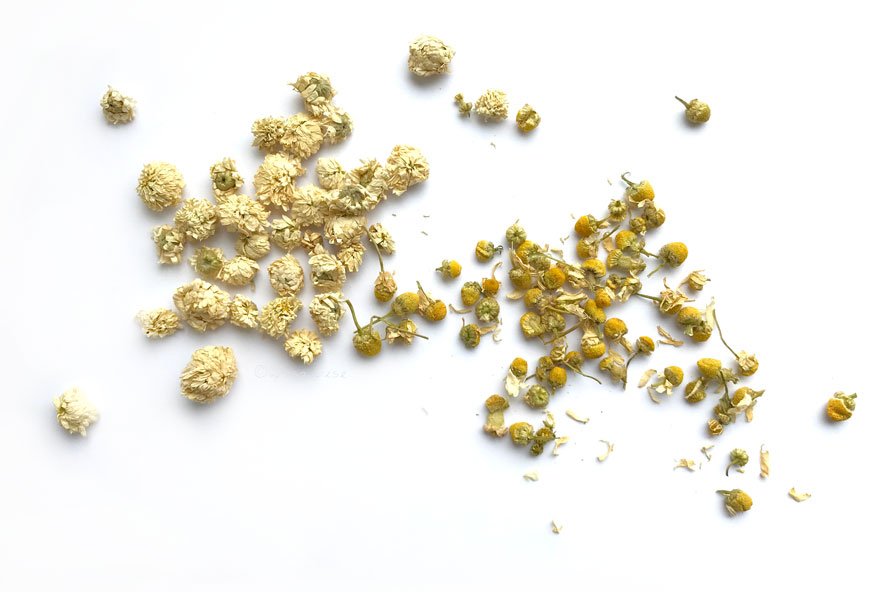 There is a clear visual difference between these 2 ingredients, but they are more alike than you may think.

They are from the same plant.

We're looking at 2 'versions' of organic Roman Chamomile: both equally powerful and beautifully fragrant (if you like the scent of chamomile).


You: They look totally different! Please check the INCI name to be sure.

(pulls out package and checks label)

Roman chamomile goes by both of these INCI names these days, so whether the label says Anthemis Nobilis or Chameamelum Nobile, it is the same plant.

Don't you just love it when INCI names throw you a loop and defy the normal rules of INCI-ness?!

Back to the chamomile...

So if They're the Same, Why Do They Look so Different?

The chamomile on the left is carefully hand sorted to include only whole flowers. It has a (noticeably) higher price tag to match as well.

Is the pricier one it a better chamomile?

At this point, it's a bit soon to tell if there is a difference with topical use. Testing is still ongoing as I have been making extracts to use in some of my skincare products.

However, these are a food grade ingredients, so I have done other testing.

The whole flowers have a surprisingly delicate, round, perfume-like scent that lingers in the nose like a gentle whiff of Spring. (no kidding - the scent made me write those words)

The buds have a crisp, earthy-apple fragrance with a touch of sweetness that all chamomile lovers would instantly recognize and nod in approval of.

I made a couple of cuppas and sat down for some side by side taste testing.

The tea with whole flowers tea had a lighter, more fragrantly delicate taste – refreshingly different from my 'regular store-bought teabags'.

The tea with the buds had a strong earthy-apple flavor that reflected the scent perfectly. The taste was richer and had more depth than my 'regular store-bought teabags'.

Conclusions after taste testing: I shall be making my own teabags from now on.

During the nose (and taste) testing, ideas started to form. The whole flowers are literally begging to be included into a skin mist or tonic – as an infusion, alcohol-based extract, or even glycerite. The buds are crying out to be turned into a vinegar-based herbal extract. They insist they will be able to overpower the vinegar scent and create a fragrantly fresh extract. I think I'll let them try.

Do you work with Roman Chamomile? Which products do you use them in? Which INCI name is on the package you have?

Angela said…
Interesting. In the U.S. botanical ingredients are listed by their common name. A visual inspection of my package of 'chamomile flowers' reveals it to be primarily buds. They are pleasantly aromatic.
October 22, 2017 at 8:25 PM

LisaLise said…
Thanks for sharing Angela. I am aware the common ingredient name is usually listed first in the USA, but doesn’t the Latin (INCI) name also appear on most packages? Perhaps in fine print?
October 23, 2017 at 7:24 PM