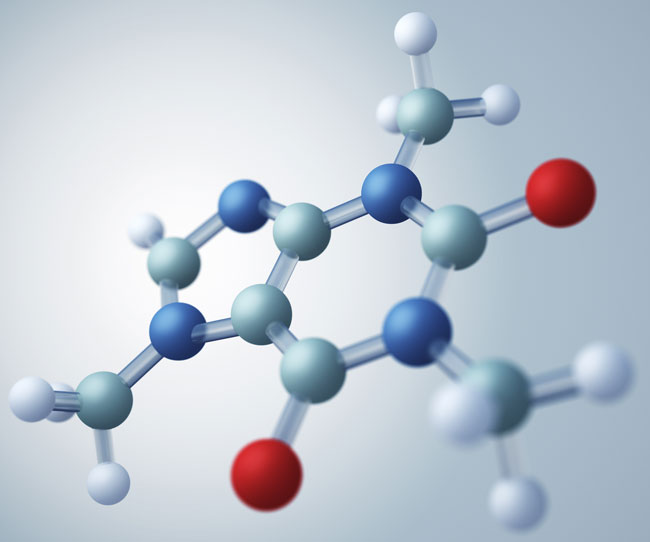 Pictured: an artsy computer rendering of a caffeine molecule.

That's what we're looking at today – caffeine. Not from a coffee-drinking viewpoint, but from a topically-applied, hair-growing viewpoint.

Caffeine-laden shampoos have actually been on the market for quite a while - all promising to boost hair growth, but is it just marketing hype?

If you ask science, the answer is something like:


(that's science-speak for 'yeah, it looks that way')


And even though science hasn't gotten to the testing on live subjects part yet, it's looking very much like caffeine will be living up to those marketing claims with documentation one of these days.

There is actually a 2-year long lab test with live subjects.

And even though I am the only person in this lab test, I can attest that caffeine not only encourages my hair growth, but it seems to bulk up the hair as well.

Caffeine, as we all know, is a stimulant. That means it helps 'quicken a process or functional activity'.

Caffeine also has the ability to penetrate hair follicles.

So, since caffeine can zip right into the follicles, it's only logical to conclude that it should also be able to do its stimulating thing to the hair and 'quicken' the growth.

And that's exactly what it seems to be able to do.

So, since caffeine can make hair grow, surely it can do even more magic and reverse baldness? Maybe even overcome genetic baldness?

As awesome as that would be – and as much as caffeine is showing promise in lab tests (and on my head) – it is unfortunately not a miracle cure for baldness.

Caffeine helps existing hair achieve its built-in growth potential, it doesn't have the power to make hair where there is none.

In short, caffeine is showing hair-boosting ability, not hair-creating ability.

LisaLise and Caffeine for Hair Growth

After developing a caffeine-rich hair-boosting spray for a gent in 2013 and testing it on myself, a case study about caffeine and hair growth was documented on this blog (links below).

I was so pleased with the results that I have continued to use the spray regularly (4-5 times a week) ever since.

They say pictures speak a 1000 words.

Have a look below.

Note: The most recent picture was not only taken with a different camera, but with a different light source and setting. I did my darndest to replicate the earlier position and angle, but after about 30 shots, gave up and decided to go with the picture that came the closest. It had to be rotated to match the angle (which is why part of the face is missing on the bottom corner). The only retouching on these photos is the addition of the red ring to show the area where the effect has been most visible.


If you think my hair looks thicker in the bottom picture, I would agree. It feels bulkier to me than it did earlier (which is why I have continued using this product).

It is also visibly more grey than in 2013. That is not due to the spray. It's due to the passing of time. I'm just fine with the grey. I earned every one of those hairs – all by myself.

Have you ever tried a caffeine shampoo? What were your experiences with it?

More about Caffeine and Hair Growth on This Blog

More About Caffeine and Hair Growth from Other Places