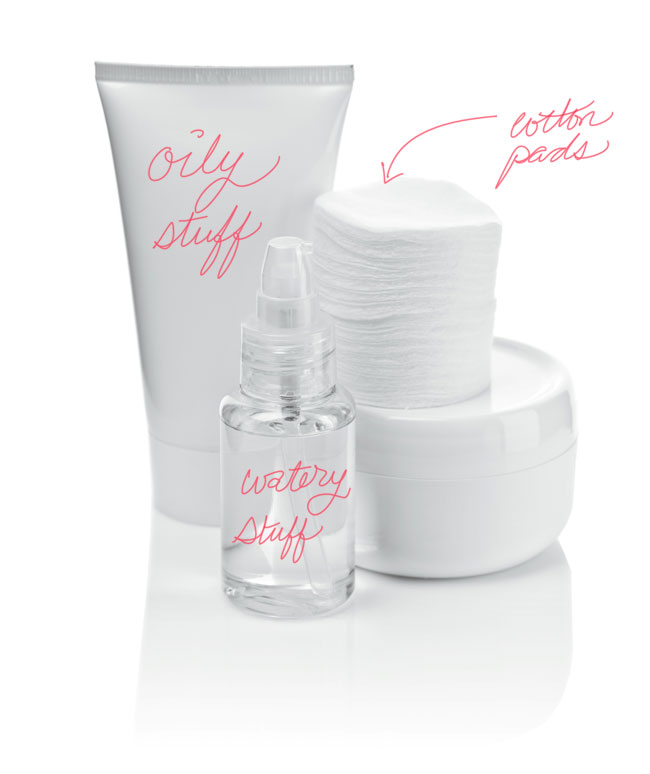 I love Pinterest. It's a great place to find all kinds of inspirational tips and how to's from cooking and gardening to DIY beauty.

But sometimes I hate Pinterest, because it also seems to be the go-to spot for misinformation and how-to's that are downright health-hazardous.

"Would you have a recommendation on how to do this without having to store it in the fridge?  Could we leave the water out?"

Your hesitation at using this recipe was spot-on, J, and thank you for asking me about it.

I'm not going to give you the recipe because it was a recipe for disaster. I cringed at the thought of the kind of irritation and damage these make-up wipes could do if someone actually made and used them.

The recipe was – in broad strokes – a little like the picture above:

combine some watery stuff with some oily stuff, place into a jar and press a stack of cotton pads into the mixture. Shake often because the oily stuff and watery stuff don't really mix, then use to remove eye makeup for months and months on end because you've made such a huge portion that was finished in a flash and hardly cost anything.

Somebody forgot something, didn't they?

Any time ANY water or water-based ingredient is introduced to a product that is going to be used for longer than 1 day, a preservative is absolutely mandatory.

Otherwise you are making nothing more than a bacteria bomb that can cause irritation, infection, sickness, and death.

OK I exaggerated a titch on that last bit, but that was to illustrate what a seriously bad idea it is to exclude preservatives when there is any watery stuff in the formula.

It would be great if there were a committee of experts who could check and then place some kind of seal of approval to the DIY beauty recipes that won't risk the health of the people who choose to make them, but for now, that's going to have to be wishful thinking.

If you're looking for a super-simple, cost-effective, efficient, and preservative-free way of removing your eye make-up, try this:
(and yes, I did give J this recipe)

Olivia J said…
I don't know Lisa, the first recipe from Pinterest sounds like a salad dressing recipe. In fact, I bet salad dressing would be better! LOL
May 31, 2015 at 3:28 AM

Anonymous said…
Thank you! I agree with all of your insights in these postings........so many things posted unwisely, so many unsuspecting people trying to be frugal and not checking out if things are safe. I decided to dispense with the water and just dribble oil on my cotton pad to remove make. Easy peasy! 😊
Thanks again. J
May 31, 2015 at 5:21 AM

María said…
That is one of the problems of the internet. Anybody can post anything about any subject regardless if this subject had been investigated or not, or its good or not.
But also, the old proverb "caveat emptor" (buyer beware), would be also applicable.
We are all responsible of all we do ourselves, and if we don't have enough common sense of checking what we are doing, we can only blame ourselves.
It is our decision to follow a result we find on the internet without further checking, even more when we have experience in diy cosmetics.
May 31, 2015 at 5:25 PM

Nanette said…
Thank you for pointing this out. I recently found something from a brand sold at an international store. They were selling another product from their online site that contained aloe juice and no preservative. I inquired and the response was that the aloe juice was "super refined". I hope they have let the bacteria and mold know that.
Another that really bugs me on Pinterest are the "natural" sunscreens. Slather on some coconut oil and an SPF of 30?! Oh, but the kiddies won't be exposed to any evil preservatives. Just some solar radiation and skin damage.
May 31, 2015 at 9:15 PM

LisaLise said…
HI María - Agree! Those of us who are used to working with these things will automatically grab the preservative without thinking because it is second nature to us. I do need to be reminded of some of the 'obvious things' on occasion.
June 1, 2015 at 11:46 AM

LisaLise said…
Hi Nanette - Brand names using 'super refined' aloe instead of preservative? Or, let's hope it was the sales person who was trying to wing it with their reply to you! As for the natural sunscreens - absolutely agree! You just inspired another blog post. Thanks for your input.
June 1, 2015 at 11:48 AM