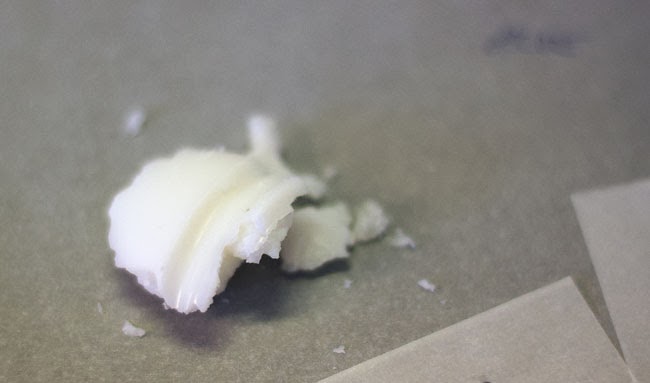 Happy April Fools Day. This is a fitting ingredient for this particular day.

What you are viewing here is a butter that has been included in my ongoing quest for the best-butter-for-lotion-bars test series. The white lump you see above came from a container labelled  'Aloe Butter'.

You: "Aloe butter? Really, Lise?  Is this an April fools thing or have you gone a bit butter bonkers?"

Me: "Yes, I went a bit butter bonkers and yes, it's not really aloe butter – except it really says aloe butter on the label".

This the second butter I ordered without reading the fine print.

This aloe butter was ordered at the exact same time I ordered this 'almond' butter, so it's probably fair to conclude that – at that particular moment in time – I was suffering from an increased state of butter-bonkers-ness resulting in temporary brain malfunction.

I am not even a bit sorry.

In essence, aloe butter is a coconut-derived butter to which aloe vera (in concentrated form) has been added.

When you think about it, the idea is pretty good. Adding aloe vera's soothing properties to a fat-based ingredient should make for the ultimate skin balm.

Aloe butter is not butter made from the aloe plant. So, calling it aloe butter isn't really correct. In that respect, it's more like an April Fools type of butter.

April fools or not, I have incorporated it into the lotion bar you see above (on the left) and given it a proper testing.

Lotion bar texture: good, solid and 'dependable'. The butter is as easy to work with as 'real' butters.
Feel: noticeably greasier than all the other butters I've tested so far.
Function: melts in quickly and moisturizes well
Scent: neutral

I don't think I will be re-ordering this butter again any time soon, but am glad I tested it out if for no other reason than to say I gave it a proper chance.

Have a great April Fools Day, and if you do play a jokes on someone, play a joke that will make them smile.

Anonymous said…
�� I also ordered aloe butter thinking it would be a wonderful addition to my 'stash'. I was disappointed because I was thinking concentrated aloe. No so much! I do still use it but will not get anymore and am more careful to read the ingredient list. Lesson learned. JNC
April 1, 2014 at 6:34 PM

LisaLise said…
Hey there JNC! Great to hear from you! I blame all these fabulous choices of butters for my temporary insanity.. still- like you say - lesson learned!
April 1, 2014 at 6:38 PM

Signe said…
Same here, I ordered few "different kind of butters" for myself, but later I realized they are not all the "real stuff". But that didn't matter, they have been good anyway, example in whipped shea butter I used partial this aloe "butter" and the result was excellent. I still like them a lot.

Unknown said…
I have found a formula that asks for Aloe Butter, I do not have any, what would be a good replacement?
December 3, 2020 at 8:16 AM