Paraben Persecution and The Precautionary Principle 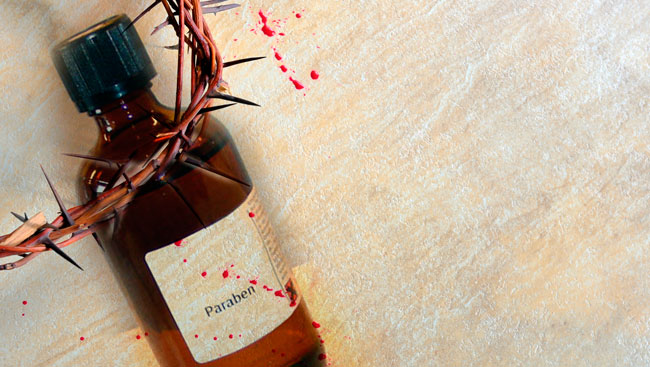 Our subject today is a bit of a biggie: calling out fearmongers and those who either stand by in silence, or – worse – go along with fearmongers for fear of being persecuted themselves. This is a rather serious issue that continues to baffle me.

I've tried to keep the tone as light as possible, but nevertheless, the facts are still the facts.

In December 2010, two of the parabens that had been undergoing study for suspected health and environmental concerns were pronounced safe by the Scientific Committee on Consumer Safety (SCCS). At the same time, it was announced that isobutylparaben and isopropylparaben would be undergoing further study. (Two additional parabens: ethylparaben and methylparaben were never under any suspicion at all).

Cosmetics formulators, manufacturers and maybe even many consumers breathed a sigh of relief. An independant scientific committee with no vested interest in anything but learning the facts had spoken: parabens were not endocrine disruptors, carcinogenic, allergenic or anything else that should cause concern.

This was indeed good news! Everyone was happy.

Except for the fearmongers.

They didn't like this news at all. They had been doing so well vilifying parabens that they had gathered quite a following. They weren't the least bit interested in giving up the position they had created.

'Never mind' they said. 'There still 2 parabens undergoing study. If we lump all the parabens together, throw in a few lies and keep shouting loudly enough, maybe people will forget the facts.'

So that's what they did.

And it didn't take long before people had indeed forgotten the facts.

The fearmongers continued fearmongering, consumers grew more and more confused, and manufacturers grew tired of having to defend using proven, safe preservatives in their products. Some started replacing parabens with alternative preservatives. They even started advertising their products as 'paraben-free' to place themselves ahead of their competition.

In January 2012, parabens had been vilified for so long, the Nordic Swan label folks were worried about loosing sales. They announced they would be excluding ALL parabens from ALL products carrying their label.

They needed a 'public' reason. After all, the facts were still indisputable: most of parabens had been pronounced safe, and the 2 still undergoing study had already been voluntarily dropped by manufacturers years earlier.

The Swan label folks decided to use the Precautionary Principle as their reasoning for dropping parabens.

The Precautionary Principle works kind of like this: if there is the slightest indication that a paraben could be linked to a possible health or environmental concern, then it may be assumed that other parabens might possibly have the same properties and may therefore also be excluded – until proven otherwise.

Hmmm. But they already proved otherwise (again) back in 2010.

So, How Many Times Does it Take?

How many times do parabens have to be proven safe before they are exonerated?
Twenty?
Four hundred?

Parabens have been on the market for over 80 years. They are some of the most tried and thoroughly tested preservatives. They have been around so long that there are even long-term studies on them.

So, why are the organizations like the Nordic Swan Label making such illogical and ridiculous policy decisions?

When are we going to stop listening to fearmongers and start paying attention to proven facts?

I'm Not The Only One

I'm not the only person scratching their head about this. Cosmetic scientist Perry Romanowski recently asked this same question in this blog post. I know there are others, but they seem awfully few and far between.

The Swan Label Story in Detail

Deodorant chemical 'found in breast tumours'
http://www.nhs.uk/news/2012/01January/Pages/parabens-in-breast-cancer-tissue-studied.aspx
August 3, 2013 at 1:16 AM

LisaLise said…
Hi there Anon - thanks for these links. I have read them as well as the documentation they link to with interest.

One thing I found especially interesting: they were able to test tissue from some people who had never used underarm cosmetics (albeit only 7 out of 40) and that there didn't seem to be any difference in either group in that respect. Even though this is too small a group to be conclusive of anything, it could indicate that underarm cosmetics such as deodorants might be excluded as a possible source. This makes sense, as parabens are naturally present in many foods.

The conclusions overall though – no causal link from parabens to cancer.
It is nice to see they continue to investigate and study this. I appreciate your input!
August 3, 2013 at 2:26 PM

Susan Barclay-Nichols said…
Thanks for opening up this discussion again. It's interesting to me how some debates will never die despite the fact that the so-called studies are refuted again and again and again. (Look up Joe Schwarcz's comments on these studies for more information!)

I think it interesting that people like us are told to keep an open mind to things like baking soda deodorant, alkaline CP soap shampoos, and studies of this nature by people who won't keep an open mind when those things are shown to be invalid. Science is about learning new things and changing what we know, but that's considered a flaw to be exploited by those who want to fearmonger. Thanks for being a sane voice in what seems to be steadily becoming an insane world!
August 3, 2013 at 9:02 PM

LisaLise said…
Thank you Susan for your input! It does indeed feel like the open mindedness seems one sided at times, but that should never stop us from aquiring knowledge. Matter of fact, it doesn't! :)
August 3, 2013 at 10:45 PM