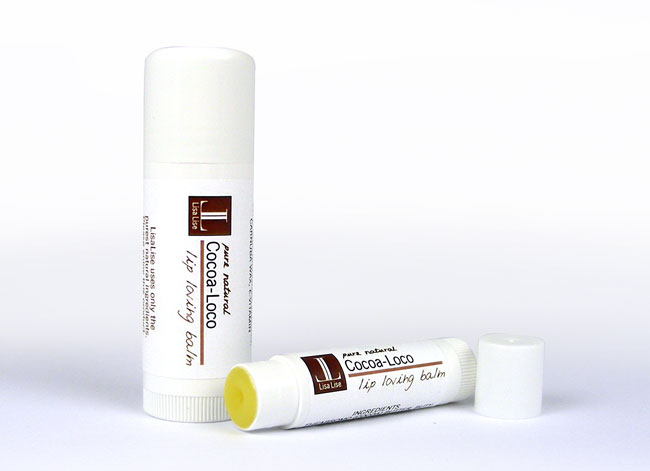 Even though my Feed my Lips lip balm has been a fave forever and ever, this spring and summer I have been revisiting lip moisturizing ingredients and trying out a few additional goodies.

I wasn't really looking to develop a new lip balm, but this one kind of 'happened' as a result of a few experimental sessions in the lab. It's partly due to the lipstick I've been developing this year, and partly due to some inspirational comments from the lip balm testers in this case study that have stuck with me ever since.

Once in a blue moon, a first batch will be an instant winner. This is one of those times. The cocoa butter brings a chocolate-like scent and taste that is softened and mellowed by the  virgin coconut oil. The result is a delightful, lip-loving experience that I have been enjoying for weeks.

And as for the silly name: it's based on the mix of 'coco' ingredients. Cocoa butter and Coconut oil. You're absolutely right in asking what shea did to get left out of the name. I couldn't fit it in.

If you have an alternative suggestion, I'm all ears. The Cocoa-loco name isn't chiselled in stone.

We may have to jump straight to a giveaway for that - what do you think?

E.E. said…
This sounds right up my ally! Currently my favorite lip balm involves taking a pinch of raw shea from the jar, adding a tiny dash of organic virgin coconut oil, and then smearing it on my lips - no joke! It works better than any thing else I've found. You'd think I'd premix a batch and carry it with me at all times but I've never gotten around to it. Anyway, I think you sound definitely have a giveaway for testers!

I also wanted to mention I really enjoy your blog. I read it regularly, but don't know that I have ever posted a comment before.
August 22, 2013 at 7:20 PM

LisaLise said…
Hi E.E. - thanks for your kind comment about the blog!

I think your bare basic lip balm sounds great - and you are using great ingredients that are good for skin – no reason to get all fancy about it until you're good and ready! :)
August 23, 2013 at 10:52 AM

Bow Tied Beauty said…
Sounds lovely and i really like the name! Anything that includes cocoa butter and coconut oil, sounds good to me :) x

Audrey said…
Sounds like a lip balm you could apply only once or twice a day 'cause it looks really moisturizing :)
cocoa butter and some rose hip oil is great too!
August 25, 2013 at 12:57 PM

LisaLise said…
Audrey you are right about that. I think this one is going to last even longer than my other balms..