Repairing Split Hairs - Is That Possible?

Who knew there was a scientific term for split ends. Trichoptilosis is the bain of hairs' existence. Wouldn't be cool if we could eradicate it completely somehow?

Some Claim They Can Repair Split Hairs

There are numerous advertisements for conditioners and other hair products that claim they can repair spilt ends.

I'll admit I get a little annoyed with the 'let me draw you a picture' tone the ads for these products have. My most common reaction to being fed wild postulations and addressed like a complete idiot by some slick speaker in an advertisement is to:
1. yell things like 'STOP LYING!' at the TV
2. leave the TV
3. start a research session

(Now you know why I am not even close to being up to date with any TV programs).

Back to our question: is it possible to repair spilt hairs by applying a product?

What The Hairdresser Says

As with many of my hair-related queries, I started this research session by asking my hairdresser. His reply surprised me. It was 'yes and no'. 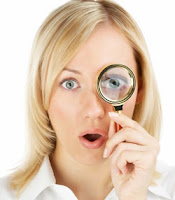 There's a yes in there?

He pulled out a microscopic photo of a split end (he has stuff like that in the back of his salon) and explained the yes part and the no part in detail.

You can't really repair a split hair – other than to cut it off above the split. That doesn't count as repair, because technically, it's removal.

But there are some products that can block a split from 'spreading' –  kind of like stopping a run in a stocking with nail polish. It doesn't make the original split go away, but it will temporarily stop the 'run' from getting any longer.

This can be a useful thing if you are talking about kinky hair, which can have a tendency to split 'mid-hair' (because they are weaker spots in hair, kinks are more susceptible to splitting and breakage).

The split-repairing products work like a kind of glue, stopping the split from spreading – until the product is washed out (which it always is), and then you are back to square one. The magic ingredient is a polyelectrolyte complex (PEC) that consists of positively and negatively charged ions. The ions stick to the hair (as well as each other). Because the PEC molecules are small enough to get in between the split parts of the hair, they can temporarily 'glue' the hair back together as it dries. It looks super convincing in the ads.

But – it is not a permanent fix.
(Told you they were lying)

Have you ever tried using a product that claimed it could repair splits? Did it help?
22.9.12
Labels: Hair Care