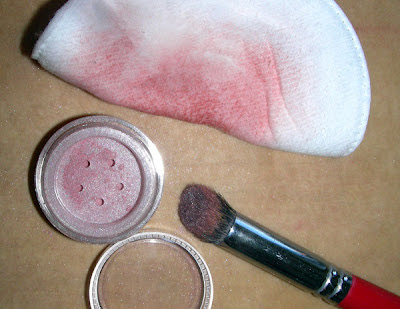 Because cranberry is such an unpredictable colorizer in emulsions and gels, I decided to give it a try where the color is guaranteed not to go wonky – in powdered make-up. Little did I know that cranberry had fresh surprises up its sleeves (who would have thought cranberries even have sleeves?)

Here's what I discovered the day I decided to incorporate it into powdered make-up.

The goal was a bright pink that could be used either as a loose powder blush or eyeshadow. 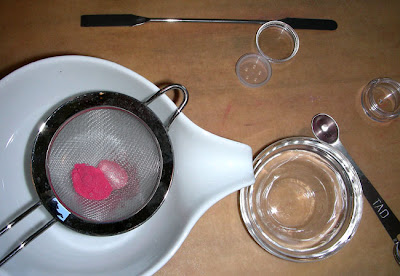 Equal parts of cranberry and my premixed cream-blush color were sifted together several times. (The super duper pinky color is the cranberry). 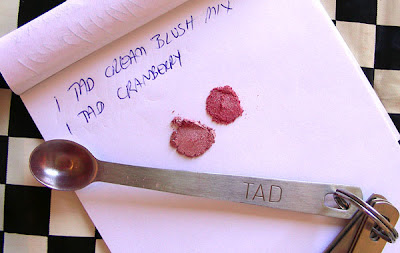 The original blush color on the left, and the result with added cranberry on the right. It was just what I was looking for. Now for the base powder... 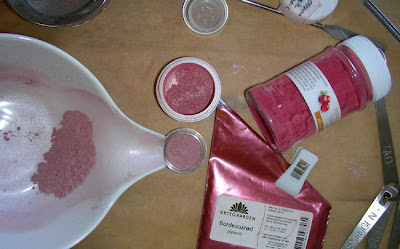 ...which dampened the color a bit more than I had hoped for. A touch of deep red was added to the mix. Testing the color on the skin revealed plenty of hot-pinky vibrance – much more than the 'dampened' color appeared to have. 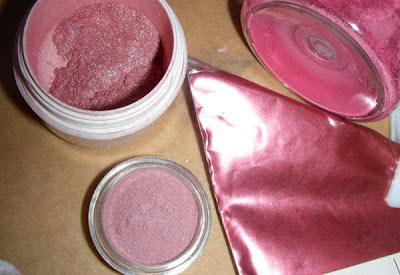 On the top left is the original blush color mix, top right; the cranberry powder, and bottom right; the bright red that was added after the addition of base powder.

Every time I tested the color as I was working, there was an ever-so-slight graininess to the feel and an almost undetectable tacky/sticky feeling where the color had been applied. At first I thought I had imagined it, but no.

Must be the only Newbie in the Mix – Cranberry

I took a small portion of cranberry and applied it neat to my skin. It felt grainy. The color disappeared almost completely as it was 'toned out', leaving tiny white grains that melted away with continued 'toning' – leaving a sticky feel. Checking the label revealed that the powdered cranberry was mixed with a maltodextrin carrier. Maltodextrin = polysaccharide = grains and stickiness.

Still, this was recommended for use as an addition to powdered make-up. I pulled out a brush and tried the mixture as an eyeshadow, then as a blush. The color went on beautifully, was vibrant, yet easy to tone out.

But it felt a little sticky.

I asked the face in the mirror – adorned with hot pink eyeshadow and brightly colored cheeks "Are you ever going to use this stuff?"

Moments later, the mixture was in the trash bin.

why I keep plugging away with cranberry when it is so outrageously unpredictable; it's certainly never boring. As soon as I figure out the answer to that one, I promise to let you know. Meantime, I have a cranberry lip pencil on my to-do list.

Other Posts With Cranberry

Unknown said…
I love this!!! I hate the way cranberry fades, so as an herbal additive in a blush? Fantabulous!!!

I know I can't sell it as a coloring agent here, but an herbal benefit? I think that's okay. I'm getting out the beetroot and cranberry powders today.
August 1, 2012 at 7:21 PM

LisaLise said…
Ooohhh Nancy promise to let me know how it goes!! Is your crannerry powder mixed with anything?
August 3, 2012 at 10:58 PM