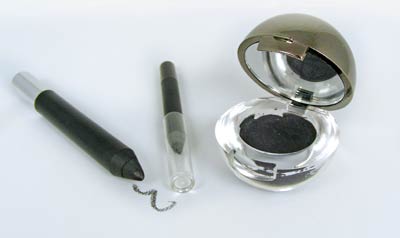 Recently, I put together a selection of 3 different colored eyebrow pencils for my itchy eyebrow buddy. Because I always have a hard time throwing out the bits of leftover 'pencil mixture', an extra pencil will often be filled. This is actually not a good idea – at all – but in the world of making make-up, I seem to have an incredibly slow learning curve.

What'd You Do Wrong This Time, Dufus?

This time, after I'd done the extra pencil, I decided to try something brand new and adventurously mixed all 3 of the leftover bits together. The result was transferred to a snazzy-looking mirrored container.

Since this was a base made specifically for pencils, I knew it was going to be too hard for the container. Jojoba was added to the mixture to soften it up – after which I realized I couldn't compensate with any additional color as I had already used it all. Not to be swayed, I charged ahead and filled the container with the mixture.

What Went Wrong With The Mix in The Container

After it stiffened, the first touch test revealed that the texture was still far too hard for my liking. Not only that, the color was now a bit too 'thinned out' because of the added jojoba. 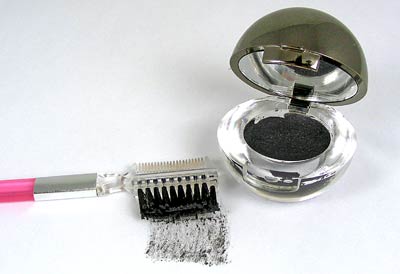 A stiffish eyebrow brush turned out to be the perfect solution for application and the color is actually good – if it is applied twice. This concoction will receive the usual one week test before it is decided to continue using it as is, remelt and redo it, or chuck it altogether. 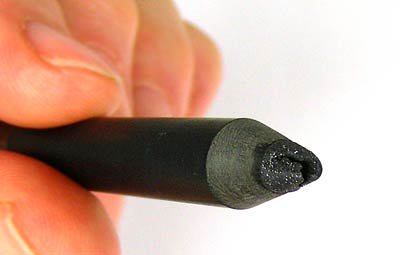 What Went Wrong With The Pencil

This is what happens when a pencil

Because the casing isn't evenly filled, air pockets and holes are present. Sharpening results in breaking, and it continues to fall apart until you have sharpened the dang thing right down to the stub. I have thrown away many pencils due to making one (or all) of the above mistakes.

Like I said – slow learning curve. (One of the reasons I officially do not do make-up for others)

PS: To be a little fair, I do skin and hair care products about 350 times more often than I do make-up (and yes, I did the math).
12.11.11
Labels: Make-up Manufacturing Product Development

Alicyn said…
i always love to see your process, no matter the end result! thanks for always sharing your lessons learned with us. :)
November 12, 2011 at 10:50 PM

LisaLise said…
Thanks so much Alicyn! I feel it is only fair to show the goof-ups as well as the successes. I made a seriously silly goof-up just today that I will be sharing before too long (but hey, these things only happen once in a blue moon-- honest!) :)
November 12, 2011 at 10:55 PM