Shea Butter (INCI: Butyrospermum parkii) is a creamy, velvety-smooth skin and hair soother that deserves a bit of spotlight space, because it's a bit of a star in more ways than one.

Native to Africa, shea butter is made from the nuts of the fruit of the Shea Tree (Vitellaria Paradoxa in West Africa, or Vitellaria Nilotica in East Africa). The worldwide desirability of this skin-loving ingredient has made it possible to create a viable income source for many small communities throughout Africa and sparked several fair trade programs. The enormous amount of labour that goes into the making of shea butter is pretty impressive – not least because a lot of it is done the same way it has been done for generations – by hand.

Preparing unrefined shea butter is a labour intensive process requiring a series of steps. It is commonly undertaken by the women in a community, where both young and old are involved. First, the outer pulp of the fruit is removed and the nut is dried. It is then separated from the shell, crushed, and roasted. The roasting process requires constant monitoring and stirring to avoid burning the nuts. The roasted nuts are then ground into a paste by hand (with mortar and pestle). The paste is then transferred to basins of water where it is kneaded by hand until the oils separate and float to the surface of the water. The oils are collected, melted, and boiled until the water is completely evaporated. Finally, the unrefined shea is allowed to harden.

It is estimated that it takes up to 30 hours of labour to produce 1 kg (2 pounds) of unrefined shea, and in that time, it has been through many hands.

Of course there are modern-day facilities that help the process along, but despite the help of machinery, there is no getting around the need of manual labour. The shea nuts are gathered from the ground around the tree, then washed and de-pulped. Next, the nuts are sun-dried in locally manufactured special solar tunnel dryers. Extraction of the oils is done by cold pressing.

Both unrefined and refined shea butter are available, and there are pros and cons to both. Proponents of unrefined shea say it has more to offer the skin because it hasn't been 'overly processed'. The downside to unrefined shea is that is can tend to go rancid more quickly, making it difficult to work with as an ingredient in a cream or lotion. In my experience, a quality unrefined shea will have just as long a shelf life as refined.

Fans of refined shea argue that it has a longer shelf life, more neutral scent and a lighter, more appealing color. Refined shea butter has a lower free fatty acid content (under 2%) which is pointed to as an indicator of superior quality. The refining process can be done with chemicals (that are removed afterwards in a washing process), or by clay filtering. Both methods are commonly used.

What It Has To Offer Skin

Shea butter contains 6% omega-6 essential fatty acids as well as small amounts of A and E vitamin. Its content of phytoesterols (5-10%) help stimulate cell growth and give it anti-inflammatory properties. It also contains cinnamic acid esters which gives it some UV-B absorbing (read: sun protection) and reparative properties.

What it Does For Hair

Not only is shea butter healing and soothing for skin, but mixed with equal part aloe vera gel, it is a wonderful conditioner for kinky hair – popularly known as shealoe butter. I was intrigued by the many positive accounts I read about and tried making up a batch for myself at one point. I had to admit that it was too heavy for my fine, straight hair, but could well imagine how this sumptuous texture would be a lovely conditioner for kinky hair – not too greasy and scent-free – a perfect moisturizing product that helps style as well.

Shea Butter has a melting point of about 35°C (95°F), which makes it literally melt on contact with skin. It can be used 'as is' as a body butter without the addition of any other ingredient.

I've worked with shea butter for years and use it in several different products. It's both a joy and a pain to work with. Shea needs constant babysitting when it is heated and can go grainy if heated too high, turning a cream or body butter into a globby, unappealing texture – and not always immediately. It will sometimes wait a day or 2 before it starts misbehaving. I've tried 'rescuing' many mixes gone wrong by what feels like countless different methods (whipping, re-heating, cooling, and a combination of any and all of the above), and if it misbehaves is in an emulsion, there is no help to be had. 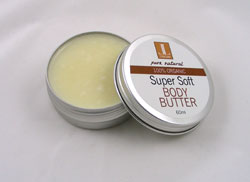 PS. The shea butter I use is 100% organic, refined and from a Fair Trade program in Ghana.
7.9.11
Labels: Ingredients Oils and Fats

Zibu said…
I am totally hooked on your blog. Thank you so much for the incredible wealth of information you have shared here!

I just wanted to say - I have only very recently begun making my own body butters, and ran into a graininess issue when I introduced shea butter to the mix. As you described, it showed up later - all of a sudden I had a lump of super grainy ickiness where I previously had a smooth body butter!

I did, however, manage to salvage it - scraped the whole finished product back into a double boiler and gently melted it down. As soon as it was liquid, I put it in the freezer. I would have put it in an ice bath first to avoid heating my freezer unnecessarily, but I didn't have any ice. The point is - after it rapidly cooled down, I re-whipped it after letting it come back to room temperature, and it was completely smooth and silky again ... and remained so.

My understanding is that a slower cooling rate allows it to form these unwanted crystals, and that they can be avoided by bringing it back to a solid state as fast as possible after melting.

Babes said…
I 'discovered' you just today and am I super happy about it! I wanted to add my experience about working with shea butter. I recently made a lip balm with shea butter and avocado oil and it turned out really well. But the tubes I carry with me both indoors and outdoors became grainy in texture. It could be because of the frigidly cold Canadian winter temperature outside and the heat indoors. The lip balm that I have sitting all the time indoors is still in the original great shape and texture.
March 18, 2015 at 6:46 PM

Babes said…
I 'discovered' you just today and am I super happy about it! I wanted to add my experience about working with shea butter. I recently made a lip balm with shea butter and avocado oil and it turned out really well. But the tubes I carry with me both indoors and outdoors became grainy in texture. It could be because of the frigidly cold Canadian winter temperature outside and the heat indoors. The lip balm that I have sitting all the time indoors is still in the original great shape and texture.
March 18, 2015 at 6:47 PM

LisaLise said…
Hi Babes - thank you for your kind words! Shea butter graininess is a known problem, but there are ways of dealing with it. If you search this blog, I have a post called Battling shea butter graininess and winning - this should give you a bit of help in avoiding the problem in your products. Best of luck with it! :)
March 20, 2015 at 10:23 AM

JW said…
Hi There! I love shea butter and learned to avoid the grainy problem altogether by "softening" it vs. melting it...on the "soften" or "defrost" setting of the microwave. All it basically needs is to be slightly warmer than room temperature to mixable with other ingredients for lip balm, skin creme and diy deodorant. I use one beater of my hand mixer in a small pyrex bowl and it whips us like a dream!
May 28, 2018 at 7:24 PM