Skin Lightening with Plants and Vitamins - Second Update on 'B' 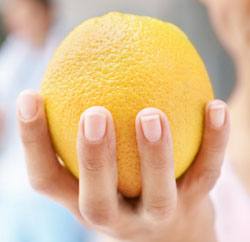 We have been following 2 ladies and efforts to lighten discolorations in their skin with a custom-made product that I have named Lighten Up - Herbal Skin Lightener. (See links to previous posts below). Today, we're looking at how 'B' is doing with the discolorations around her cheeks and eyes.

Each series of photos below is set up as follows:
Top photo: Before
Middle photo: after first period of use (please see this previous posting for a detailed explanation)
Bottom photo: after 1 month of continued use

Once again, I really must admit my lack of photographic skills at duplicating the lighting and angle of the photos has made these photos less illustrative than I had hoped. For the most recent photos (placed at the bottom of each series), I concentrated on trying to match the setup of the 'before' photo. It is almost impossible to judge from these pictures whether or not there is a difference in skin tone, but perhaps they describe – in broad strokes – how the discolorations appear in comparison with the surrounding skin.

One thing both 'B' and I both noticed was a difference in the appearance of fine lines around the eyes. They seem to be less dominant now, some even seemed to have disappeared (an unexpected bonus!).

'B' has been pleased with the texture of the product and says it is easy to apply and quite pleasant to use. She has not been thrilled about keeping out of the sun, but has nonetheless taken it upon herself to make hats and head covering constant companions for the duration of this trial. She also mentioned that the gel texture was incompatible with her foundation, which made her drop the morning application and only use the product at night.

Despite this inconvenience, she mentioned that she was running out and asked when the next batch would be ready – before I even had a chance to ask her if she wanted to continue with the product.

Although it's been a bit of a disappointment discovering my lack of photographic and lighting skills, the actual product has been enough of a success as to where 'B' and 'C' are both interested in continuing with it. Obviously it hasn't magically erased every spot, but there is a definite 'fading' and 'freshening' of the skin tone (and then there's that added bonus effect!)

Find the previous posts about this skin lightening project her: