Nature often surpasses anything we humans can conceptualize. A friend told me recently that there is an all-natural, relatively innocent-looking plant so full of toxic chemicals that it will cause extreme skin reactions, photosensivity for life and put you in the hospital if you so much as touch the sap from it. Was she kidding? I checked. She was absolutely right. Heracleum mantegazzianum is a downright dangerous slice of nature.

They don't call this plant 'giant' for nothing. It normally grows from 2 - 5 meters high (6 - 16 feet), but has also been measured in at a full 7 meters (23 feet) in height. It is also unfortunately pretty good at spreading, producing from between 1500 to 100,000 seeds (!) in a single season. The entire plant is permeated with toxicity: leaves, roots, stems, flowers, and seeds are all rich in furocoumarin – a stuff that is seriously bad news for skin and eyes. 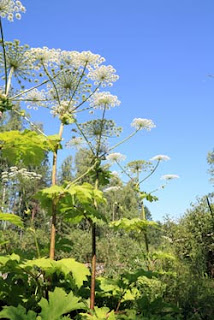 What Hogweed Does to Your Skin

Contact with the sap of the Giant Hogweed causes phytophotodermatitis (hypersensitivity to ultraviolet light with severe skin inflammation). The chemicals do their damage by entering the nucleus of the cells in the connective tissue and bonding with the DNA, resulting in the death of the cells (seriously, is this not scarier than any sci-fi horror story you could ever imagine?)

The Blow by Blow

The first symptoms after exposure are red and itching skin, followed by blisters and a severe burning sensation that can last up to 48 hours. Finally, black and purple scars form that can last up to several years. The exposed areas of your skin will also be photosensitive forever after. Even the smallest amount of sap in the eyes will cause temporary (and quite possibly permanent) blindness.

Giant Hogweed is so toxic that many countries have passed laws against planting, distributing seeds or causing the spreading of it in any way. For example, in the UK it is not only illegal to plant, but to 'cause it to grow in the wild'. In the USA, it is regulated as a federal noxious weed.

Because of its rather decorative look, Giant Hogweed (which is native to Western Greater Caucasus) was introduced to the UK in the 19th century. It has over the years spread throughout the British Isles and Ireland. It has also found its way to Germany, France, Belguim, and even the US and Canada, so it's a mite hardier than one would wish.

If you ever come across one of these huge, umbrella-like plants, don't be fooled by it's appearance. Keep yourself – and most especially your children – far away from it and contact the local authorities so it can be dealt with.

• Have you ever seen a Giant Hogweed? Do you know anyone who has been exposed to one? What did they do?
28.7.11
Labels: Tips

girly said…
you know, Russians planted seeds of this plant all over Estonia because they thought it was a great plant to feed farm animals. Ofcouse the animals fell ill, the plants still spread ferociously. Another Soviet Union mishap.
September 3, 2011 at 5:44 PM

LisaLise said…
Oh my goodness!! Are these plants now growing all over Estonia? How terrible that a nation should have to live with the results of a misguided attempt to feed farm animals!
September 5, 2011 at 9:51 PM

Binky Melnik said…
Guh! I saw the photo, thought it was Queen Anne’s Lace, and was terrified, as I picked it as a kid. Am sooo relieved it turned out to be something I’ve never seen. Sure seems as if it’d make a terrific weapon for war.

I’m off to google photos of the damage it does because I’m a masochist that way,

Mother Nature sure is weird, making things like this. I hafta assume she had a reason for it, but I can’t possibly fathom what that reason is.
September 25, 2018 at 12:39 AM

LisaLise said…
HI Binky - thanks for your comment. Yes, Mother Nature can be a bit of a mystery at times!