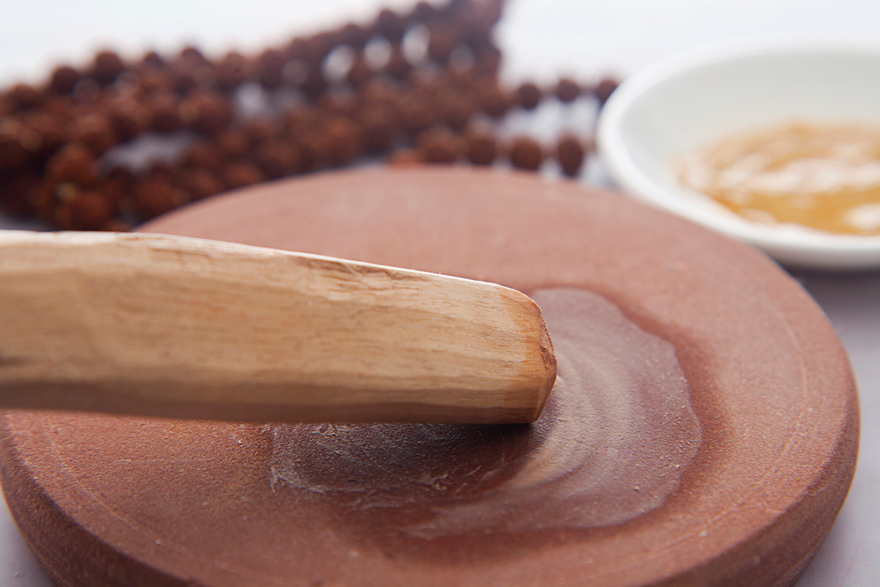 The essential oil is so coveted that is it also sold in numerous adulterated versions.

It Started in Sanskrit

If you have ever studied the ancient language Sanskrit (hey, haven't we all?), you may know the word Chandana – which is the original common name for sandalwood. The fact that the name originates from Sanskrit is an indication sandalwood has been popular for well over 3000 years.

Described as 'the wood that is more precious than gold', sandalwood has functioned as the main building material for many religious structures and temples throughout history.

It is also to be found amongst the ancient Egyptians favored ingredients – not for use as a perfume, but as an addition to an effective enbalming mixture.

Native to Mysore India, the Santalum genus has over 19 species, of which Santalum Album is the most prized for essential oil production. The species has been so popular for everything from essential oil production to construction of buildings and furniture that it became necessary some years ago for the Indian government to take complete control of both production and exportation in an attempt to save the trees.

Santalum Album is listed as a threatened species, and felling of any tree is strictly prohibited until it has reached a minimum age of 30 years.

Unfortunately, the more precious the wood, the more bad guys come crawling out of the woodworks, because poaching the trees is profitable enough to make protection and conservation a continuous and serious problem.

This is doubly unfortunate because – contrary to other trees that need perhaps provide only their bark – production of sandalwood essential oil requires felling the entire tree.

With its ideal climate, Australia not only cultivates both the Santalum Album and Santalum Spicatum species, it has a well-organized Sandalwood Network (ASN) with over 60 members and 13,000 hectares of plantation.

The chemical profile of the Australian Santalum Spicatum is quite similar to the Indian, with the main difference being a lesser content of santalol (the Indian variety can carry up to 65% where the Australian will have max 30%).

Although both oils are interchangable in aromatherapeutic usage, there is a slight difference in the scent. The first impression (top note) of the Australian sandalwood is of a drier and more resin-like aroma than its sweeter-scented Indian counterpart.

Otherwise, the two are quite similar.

What Sandalwood Can Do For Skincare

Sandalwood has good antimicrobial properties, why you will see it in many soaps. It is an excellent oil for rehydrating the skin and bringing out a healthy glow. Its astringent abilities makes it ideal for toning and firming, and it is equally suited to dry, oily and mature skin.

Sandalwood is also recommended for problem skin (eczema and acne) as well as being a good addition to after-shave for battling 'beard bump'.

Sandalwood is classified as non-toxic, non-irritant and non-sensitizing.

What Sandalwood Can Do For The Rest Of You

Sandalwood promotes calm and harmony and is recommended as a meditation aid
Sandalwood is believed to be an aphrodisiac, promoting a sensual mood
Sandalwood is revered as a tension and stress reliever

I haven't ever seen any oils from any of these trees (and to be quite honest, I'm not sure any of them are even used to produce essential oil).

A couple of the 'more popular' adulterated versions of sandalwood will have names such as Amyris Balsamifera (also known as West Indian Sandalwood) or Myoporum Sandwicense (known as Bastard Sandalwood – although I doubt they would put that name on the label!).

Oils from these sources will lose their aroma within a relatively short time. (Also, they just ain't the real thing!)


It's There, But Not

Admittedly, I have been very sparse with my use of sandalwood oil. Even though I have worked with it for a few years now, I still feel like I'm getting acquainted with it.

As a fixative and 'anchor', it never fails in personal oil blends.

Sandalwood is also great as an addition to a clay mask.

The presence of santalum album in my 7-Day Skin Renewal Formula can best be described as 'simultaneously discreet and distinct'. If that sounds a bit vague, then it's probably due to my ongoing process of familiarizing myself with sandalwoods many ancient and wonderful secrets.