Whipped Freebie Butter - When Mistakes Are a Good Thing

This is what happens when someone goofs up. Hey, mistakes happen. Nobody's perfect. It's part of life.

Sometimes a mistake even turns out to be a really good thing – like this time.

Recently, I ordered a container of shea butter (among a few other things) from one of my suppliers. Upon arrival, I checked all the contents and labels against my order. Everything was A-OK.

The shea butter (which was in a sealed, opaque container) was placed in the cool storage unit (sounds more professional than fridge, doesn't it?).

Three weeks passed before I needed it. 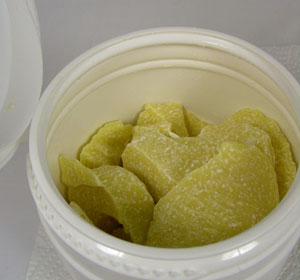 When I broke the seal, this is what I saw.

Even though this is the first time I've ordered shea from these folks, I was pretty darn sure I wasn't looking at shea – not even close.

I sniffed it. It really smelled like cocoa butter.

I tasted a little piece. Guess what it tasted like.

Conclusion: somebody must have messed up a label at the suppliers warehouse. I contacted them and they were totally apologetic, sent a replacement immediately, and even said I could keep the cocoa butter.

That was both professional and incredibly nice.

What To Do With Freebie Butter

So, here I am with a whole free container of cocoa butter.

For the longest time, I've been thinking about making a real simple, back-to-the-barest-basics whipped body butter that would also be good for dry patches (elbows, hands, feet). It would have to be light and airy, yet rich and creamy – something that would melt into the skin upon contact.

Cocoa butter is an ideal base for a product like this because it really has a lot to offer in the way of skin care.

Now, a simple whipped butter is – in theory – real quick and easy to do. In reality however, butters are more demanding to work with than one might imagine. They will behave in all sorts of different unexpected ways if they aren't treated 'just so' during the entire production process.

So, having an entire free container to experiment with is the perfect start for an all out exploration of how cocoa butter lends itself to different partners and textures.

For the first batch, I mixed the cocoa butter with hempseed oil. Everything started off well – the mixture whipped up nicely and was transferred to a jar. So far, so good, but the true test is after the mixture has set completely.

The next day, the mixture was so hard it had to be dug out of the container with a spoon.

To make things worse, hemp and cocoa butter wasn't the most appealing scent. Note to self: remember at all times how incredibly demanding butters are to work with.

More to come after the next batch.
24.5.11
Labels: Manufacturing Product Development