Let's Hope It's Not The Perfect Eyeliner 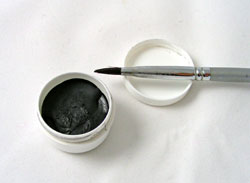 I just love it when an experiment works! I've needed a black kohl pencil for a while and finally got around to doing one the other day.


Normally, I will make a batch of base-mixture once a year, then just weigh out the amount I need, melt it and add pigment for a pencil at a time. Because the mixture stiffens almost immediately as it is poured,it is always necessary to make more mixture than the pencil-casing will hold.

The leftover is usually scraped out of the beaker and thrown away, but this time I decided to remelt it and experiment a little to try and create a texture soft enough to be used as an 'old fashioned' eyeliner (to be applied with a brush).

To soften the mixture, I added a bit of jojoba, then poured it into a small jar and let it stand overnight to settle. It turned out too soft and the color wasn't opaque enough any more. Remelting everything and adding a bit of palm wax (to stiffen the mixture back up a bit) and more pigment did the trick.

So What's The Problem?

Because the entire mixture was re-melted, re-poured, and had new ingredients added, I can't be sure of the exact amount of each ingredient in the final batch.

You always loose some of the mixture as it is transferred (remember this is a thick substance that stiffens fairly quickly) so, even though I was careful to write everything down, the formula can't possibly be 100% accurate.

If this turns out to be the eyeliner of the century, I am going to be hard-pressed to duplicate it.
9.11.10
Labels: Make-up Product Development